Needle Man (or Nīdoruman in Japan) is one of the 8 Robot Masters and main antagonists of the NES video game Mega Man 3 as well as one of the 4 additional bosses of the Gameboy game Mega Man II. While originally created by Dr. Light as a robot meant to mine the Energy Elements to be used for Gamma, he has stolen and reprogrammed by Dr. Wily to become the violent Robot Master he is now. 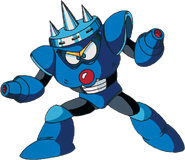 Retrieved from "https://villains.fandom.com/wiki/Needle_Man_(Mega_Man)?oldid=3543332"
Community content is available under CC-BY-SA unless otherwise noted.