Cowardly Minion
Needlenose is a minor antagonist in Generation One of the Transformers franchise.

He was presented as a Targetmaster in the toyline, but there was no mention of this in his comic appearances.

Needlenose was part of the new Decepticon Mayhem Squad being put together by Snarler to hunt down Carnivac and Catilla, the surviving members of the previous squad who had defected to the Autobots. During a training session involving hard light holograms of the Autobots, Needlenose panicked and tried to run. Knowing he would be executed for cowardice if he did, the squad's field leader Spinister pretended to be in trouble so Needlenose would come to his rescue and he was accepted into the Mayhems.

Needlenose and the other Mayhems travelled to Earth and unleashed a hell hound on a human village in an attempt to draw out the Autobots. Instead, the attack drew out Carnivac himself, who found himself ambushed by the Mayhems. Carnivac managed to take Needlenose out of the battle but Catilla was killed before the Mayhems finally retreated.

Needlenose was later part of the squad put together by Thunderwing to investigate why the Autobots were scouring the galaxy for the Creation Matrix. They managed to take out the Autobot Headmasters Nightbeat, Siren and Hosehead, interrogating them for information, then hunted down the other squads. After getting nothing from an encounter with the Triggerbots, they ended up battling a group of Autobot Pretenders. Spinister and Needlenose were frustrated when Thunderwing recalled them when they were on the verge of finishing off Doubleheader. They became further disenchanted when, during a battle with the Classic Pretenders, Thunderwing was prepared to let Windsweeper be killed rather than lose a lead on the Matrix. Thunderwing succeeded in gaining the Matrix and Needlenose and the others joined him in infiltrating the Ark in a stolen Autobot shuttle, but were largely left as spectators as Thunderwing was possessed by the Dark Matrix and tore through the Autobots. After Thunderwing's defeat, Needlenose and the others surrendered without a fight.

The Carnivac plot was concluded in Marvel UK's Earthforce storyline, where the Mayhems set up camp on an island and waited for Carnivac to come to them. The increasingly nervous Needlenose sent out a false alert to see how fast Bludgeon, Octopunch and Stranglehold would react. The trio nearly killed him in response until Snarler and Spinister stepped in. The incident was doubly fatal for Needlenose: Not only had he left a gap in the defences with the fake alert, allowing Carnivac to get into his quarters, but when he tried to send out a real alert, the others thought he was faking again and ignored him. Carnivac casually despatched him.

Needlenose in Marvel US 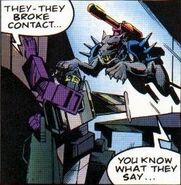