Prince of the Black Dragonflight

Experimenting with the blood of dragonflights.

Lead the Black Dragonflight to rule over Azeroth.

Nefarian is the son of the evil dragon, Deathwing, and the brother of Onyxia. He first appeared in his human guise, Lord Victor Nefarius, working with the Blackrock Orcs. With the help of the Orcs and their Warchief, Rend Blackhand, Nefarian ruled over the volcano, Blackrock Mountain. The players invaded the Blackrock Spire, where Nefarian watched from a balcony as they battled Rend Blackhand. Blackhand was killed, and Nefarian fled further into the mountain.

He later appeared when the heroes invaded his personal laboratory, Blackwing Lair, where he created horrific genetic monsters. The heroes challenged the son of Deathwing himself, and Nefarian was killed. His head was taken as a prize to show the world that Nefarian was no longer a threat. It was far from over, however...

Years later, when Deathwing returned, Nefarian was brought back to life in undeath. He continued his work in Blackrock, creating nightmarish monsters, such as the lava worm, Magmaw, the blind dragon, Atramedes, and the mutated hydra, Chimaeron. The heroes once again invaded Blackrock Mountain, and killed Nefarian's many failed experiments. When all of his creations were killed, he challenged the heroes for a final battle. Shortly before the battle began, he raised his sister, Onyxia, back from the dead to fight by his side. She was taken care of quickly, however, and Nefarian's demise soon followed. 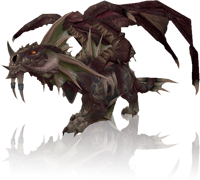