To serve Arius and the Uroboros Corporation forever.

Kill Dante.
Kill anyone who stands in Arius' way.

Nefasturris (lit. "Tower of Sin" in Latin), also called the "Tower of Misery", is a giant skyscraper-possessing demonic monster and it is both a boss and a minor villain in Devil May Cry 2.

This mutant monstrousity that appears as a giant undead humanoid with half its body covered with black-reddish oozing color and spikes on its back, is made up of thousands of bat-like demons, which also serve as energy conduits between the giant and the Demon World. Those creatures, when combine within a skyscraper, creates the form of a giant beastly humanoid that emerges from the possessed building.

After its first form is defeated and destroyed, its decapitated head comes to life and continues to fight on as Nefascapitas (lit. "Head of Sin" in Latin), the "Head of Disaster".

Nefasturris is the boss for Mission 6 of Dante's scenario in Devil May Cry 2. It emerges from a bewitched high-rise building within the streets of the Uroboros Corporation's very own Uroboros City, but Dante beats it down, eventually slaying the Nefascapitas, and continues on to stop Arius.

Nefasturris later reappears as a component of Argosax the Chaos.

Nefasturris is a demon with great physical strength. It can generate lightning out of it mouth in two ways, a large stream and multiple small needles. It also can generate flames, and  summon bat-like demon known as Nefasvermis, cousins to Flambat demons.

When it becomes a decapitated head known as Nefascapitas, it can fly, generate lightning out of it's mouth the same way Nefasturris does, and can generate electric streams that attempt to ram at Dante.

It is also possible that Nefasturris may have some ability to manipluate metal, as seen when it emerges from the skyscraper, it bends the modern building (which is filled with metal beams) as if it was rubber. 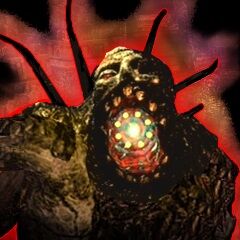 Nefasturris, the "Tower of Disaster". 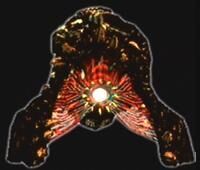 Nefascapitis, the "Head of Disaster". 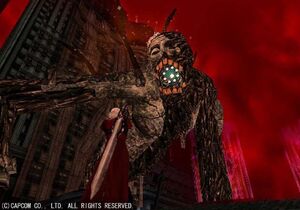 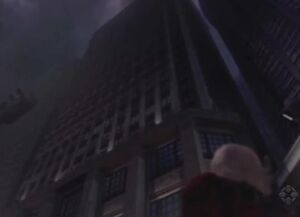 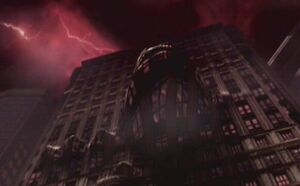 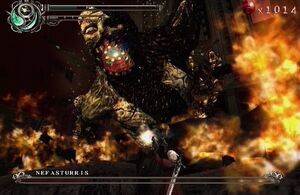 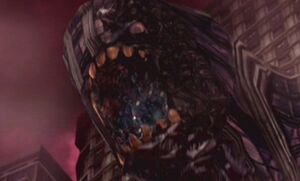 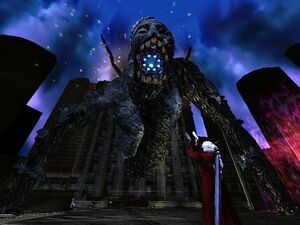 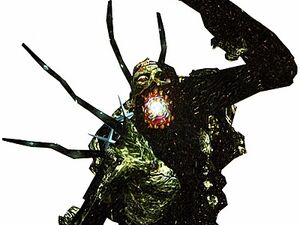 Retrieved from "https://villains.fandom.com/wiki/Nefasturris?oldid=4142952"
Community content is available under CC-BY-SA unless otherwise noted.