To get Cleo to marry Seth (Boo York, Boo York/failed)

Nefera de Nile is a 2011-introduced and all-around character. She is a mummy and a Monster High alumni. As the oldest daughter of Ramses de Nile, Nefera is destined to inherent the de Nile throne and she's been raised to be well-aware of that. This has taken a huge toll on her, making her unable to function past the safety of high school and hostile to anyone she perceives as either a threat or too low to breathe the same air as she does. Nefera was a popular model in Europe for a short time until her attitude forced her out of the glamorous world and back to her father's pyramid. This doesn't stop her from telling everyone she is a fashion model, though, which in her mind she still is regardless if she's on the catwalk or not. Nefera's favored victim is her younger sister Cleo, whose every success invalidates Nefera's sense of superiority.

From her appearances thus far, Nefera seems to think that she is perfect, and that everyone else is beneath her - even her own younger sister, Cleo de Nile. She is always pointing out Cleo's flaws, and pushing Cleo towards acting more like her, even in matters that do not concern her.

Nefera also appears to be quite deceitful, as she sometimes blames her sister for things that she has done, getting Cleo into trouble instead.

She's basically an older version of Cleo, relying on their family servants and not even looking twice at a task that seems beneath her. This is most likely due to her regal heritage, and the fact that Nefera would be next in line for their dad's throne since she's the oldest. Plus having the attention of being a "world-famous" supermodel going to her head makes her even more stuck-up and meaner than Cleo is. Either way, she's very bossy and has been since her and Cleo were little kids.

But despite her nasty ways, Nefera can have her moments of kindness and has shown the capacity to be a nice ghoul, as shown in "Kind: The Shockumentary", after being told by Cleo that she was a great older sister, she smiled sincerely and let the Kind Campaign leaders through the door without being mean.

In the webisodes, she is voiced by Wendee Lee who also did the voice of Scorpina in Mighty Morphin Power Rangers..

There's an obvious family resemblance between the De Nile sisters, Nefera and Cleo. Nefera's hair is nile blue (it's unknown if this is her natural hair color or if she dyed it), with thick highlights of black and gold, and is worn up in a ponytail through a gold headdress with a single braid. Her eyes are light purple with an orange diamond shaped birthmark in her face. She's always in some bandage wrappings, which she probably needs so she doesn't disappear into dust, just like Cleo.

Her younger sister is Cleo de Nile. She acts very superior to Cleo, and will do anything to make her look bad. Because both Nefera and Cleo have superiority complexes they don't get along very well. Their father is Ramses de Nile, a successful antiques dealer.

In response to the Friends entry of her profile, Nefera claims that she "rules alone". But in "Neferamore" and "Monster Mashionals Part 1", she appears to be friends with Toralei and the werecat twins. This friendship probably got blemished in "Monster Mashionals Part 2", when the trio retaliated against Nefera's lack of trust in their skills (as Nefera had tried cheating so they could beat Cleo's B-squad).

In Back and Deader Than Ever, Nefera lives in Cairo. Spectra Vondergeist mistakes the De Nile sisters for being twins. 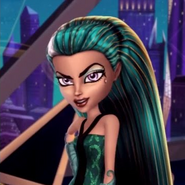 Nefera as she appears in Boo York Boo York.

Add a photo to this gallery
Retrieved from "https://villains.fandom.com/wiki/Nefera_de_Nile?oldid=3551099"
Community content is available under CC-BY-SA unless otherwise noted.