Nefir Hasenuf, simply known as Nefir, is an Egyptian-themed imp whose greed rivals that of Iago. He always causes great calamity and uses his great imp ingenuity to capitalize on the needs of those involved to obtain treasures. Unlike Iago who is sometimes bound by moral choices for his friends' sake, Nefir has no restraint to accomplish his goals selfishly. His name is a comical adaptation of "Never Has Enough".

He was voiced by the late René Auberjonois, who also played Mr. House in Fallout: New Vegas, the Hylden Lord in the Legacy of Kain series, Patrick West in Star Trek VI: The Undiscovered Country and Tony in Police Academy 5: Assignment: Miami Beach.

Nefir debuted by having his imps rebuild Getzistan after it was destroyed every night by a giant dancing pink rhinoceros named Semir the Destroyer and charging more and more each time.  While enjoying his riches, Nefir heard that Aladdin planned to stop Semir, upsetting him greatly.  That night, Aladdin and Genie attempted to stop Semir, but failed.  Genie prepared to fight Semir, but his efforts were sabotaged by Nefir's imps.  Immediately after, Nefir offered his services to Aladdin, saddening Genie.

Finding the moping Genie, Nefir told him where to find Semir's cave.  When Genie met Semir, he discovered that Semir had been slipped on magic shoes that forced him to dance uncontrollably whenever he heard music.  Nefir then revealed himself to be the culprit, trapped Genie, and gave him his own pair of magic shoes.  Later, Aladdin discovered that Nefir had backed out on his promise and ran into the dancing Genie and Nefir.  Genie revealed what Nefir had done, causing Aladdin to piece together Nefir's plan.

While Nefir gloated about having two giant monsters destroying the city, Aladdin got the idea to lead Genie and Semir away from the city with his own music.  Nefir ordered his imps to play louder, which soon escalated into a music war between the two groups until Genie and Semir danced so fast, the shoes were destroyed.  Genie captured Nefir and Semir forced him and his imps to dance as entertainment for Getzistan.

Nefir attempted to enter a tower that housed a worm that spun golden silk, but his imp minions were unable to get past the tower's defenses.  Nefir realized he'd need magic to get inside and put Aladdin into a deep sleep by spiking his milk.  He then left a note saying that only the worm's silk could cure him.  Genie reluctantly turned to Nefir for help (Iago went along too after hearing that the silk is gold), since only an imp would know where the worm was.

After forcing Genie to beg for his help, Nefir tricked Genie into getting past the tower's defenses (including a three-headed flying lion), and trapped him in a bottle once they were in the tower.  Upon unraveling the silk, Nefir found out the worm had metamorphosed into an imp-eating moth.  Forced to free Genie and ask for his help, Genie used Nefir as bait to trap the moth and wind him back up in his own cocoon.  After curing Aladdin, Genie said Nefir stayed behind to make sure the moth would remain trapped forever.  Nefir was then seen being chased by the three-headed flying lion.

The Way We War

Nefir made his final appearance as war advisor to the Sultan following the attack on Agrabah by the Odiferans, trying to convince them that the attack was an unprovoked invasion attempt by the barbarians and providing the city with weapons and defenses-for a price, of course.  However, Nefir turned out to be advising the Odiferans as well, providing them with (expensive) weapons and reminding them that the Agrabanians had stolen the Sacred Crock of Cheese.

As both sides fought, Nefir provided weapons for all for as much as he could get.  But when Aladdin went to talk to Prince Uncouthma to figure out what was going on, Nefir told Uncouthma and General Gouda that Aladdin was a spy and the one who stole the Sacred Crock of Cheese.  Uncouthma went off to kill Aladdin, but Nefir sent one of his imp minions to witness the events of Aladdin's demise.

When Uncouthma and Aladdin crossed paths, Uncouthma could not bring himself to kill Aladdin and revealed what Nefir had told him.  Aladdin then told Uncouthma what Nefir told them.  Nefir's imp flew off and told Nefir what had happened.  Nefir told General Gouda that Uncouthma had been captured, causing Gouda to order the most powerful weapon he had.  Nefir then went to the Sultan with an ultimate weapon as well, a tower that shot lightning.

The imp used it to shoot at Aladdin, seemingly killing him.  This served as a wake-up call for everyone about the horrors of war, though Aladdin survived.  Both groups confronted Nefir and discovered he had been hiding the Sacred Crock of Cheese under his hat. They then forced Nefir to rebuild Agrabah and refund all his money. 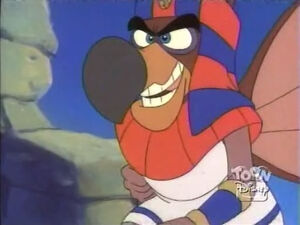 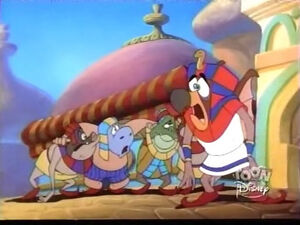 Retrieved from "https://villains.fandom.com/wiki/Nefir?oldid=4042647"
Community content is available under CC-BY-SA unless otherwise noted.