Hang out with Scott Pilgrim (succeeded, after redemption)

He is main protagonist Scott Pilgrim's inner darkness and his evil alter-ego, representing his forgotten flaws and mistakes. Michael Cera, who portrays Scott in the movie, also portrayed Nega Scott in his brief movie appearance.

Nega Scott was created after Scott began to run from his own past instead of facing it. He begins to follow Scott around without saying a single word, often scaring Scott in the most awkward situations, whenever he is scared, hurt or emotionally vulnerable. In the final book, Nega Scott makes one last appearance after Kim tells Scott the incident with Simon Lee was all a mistake. He immediately brings the Nega into the scene and both begin to battle while Kim yells at Scott that he'll never win the battle if he keeps denying everything, and that she might not know what will happen then. This causes Scott to accept his past, forcing Nega Scott to merge back into him.

Nega Scott makes a brief appearance in the movie after Gideon Gordon Graves is defeated. Scott tells Ramona and Knives to leave this battle to him, and both leave in hopes of seeing Scott winning. However, in what was deemed the "mother of all anti-climaxes," both Nega Scott and Scott himself leave the Chaos Theatre in good terms, talking to each other like good friends. When Ramona asks him what happened, he tells her they had "a lot in common."

Nega Scott is the boss of World 6. He is quick and agile, but his moves are all similar to Scott's, so he isn't that hard to beat if one knows Scott's moveset. He is also a playable character after beating the game with Scott, Kim, Stephen, and Ramona.

Nega Scott is known to be incredibly dark and quiet, never being noticed by anyone when he arrives (only Scott) due to lack of speaking and more stealth. As the name implies, he is the exact same opposite of Scott. Unlike Scott, he openly drinks, is more interactive and much less shy, making him much more noticeable than Scott himself. His powers are all a dark variation of Scott's. 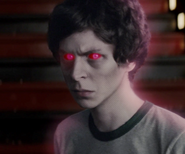 Nega Scott as seen in the movie.

Nega Scott as seen in the video game.