Bird in a Cage

Proving that he was right about destiny (formerly).

Neji Hyūga (in Japanese: 日向ネジ, Hyūga Neji) is a former antagonist and main supporting character of the anime and manga series, Naruto. He is a member of the Hyūga Clan and Team Guy, along with Rock Lee and Tenten. In the Chunin Exam Arc, Neji appeared as a rookie who displayed great resentment towards his team-mate Rock Lee and his cousin Hinata, and caused them a lot of psychological pain. His hatred towards the main branch also occurred after the death of his father.

He was voiced by Koichi Tochika in Japanese and Steve Staley in English.

As a child, Neji was kind and prone to smiling; on Hinata's third birthday, he confided to his father that he thought she was cute. He lost these qualities after his father's death, growing serious and cold, more mature than most his age. For years he was driven by a fatalistic belief that his and everyone else's fates were determined from birth and were inescapable. He perceived his own destiny as being that of a rare talent, causing him to arrogantly place himself above those he believes are "weaker" than himself. He also perceived that his talents would always be handicapped by mandatory servitude to the Hyūga's main house, which he resented and it fueled his animosity towards the main house and its members.

Neji shared his philosophy about fate with those he met, gladly telling them when they are straying from the paths that have been set out for them by, for example, trying to exceed their natural limitations or trying to defeat him in combat when they lack any obvious ability to do so. When he shared his philosophy with Hinata, she concluded that his insistence upon destiny was actually a sore spot for him that caused him inner suffering: he so badly wanted to prove himself to the main house yet feels incapable of doing so. Neji attempted to kill her in anger for her words. Naruto Uzumaki also disagreed with Neji, claiming that Neji was not realizing his destiny because he was in fact holding himself back. Neji initially scoffed at Naruto's suggestion, but he was forced to reevaluate when Naruto, a "failure", defeats him, a "genius", in a fight.

From his experience with Naruto, and from learning that his father was not forced to die, Neji decided that fate is not inescapable but that, rather, one's destiny is what one makes of it; he felt indebted to Naruto for releasing him from his prior "darkness". The destiny Neji ended up selecting for himself was to become strong enough to never lose again. In pursuit of this goal he trained with his teammates, whose own dreams he became supportive of, and later with members of the main house, whom he gradually started mending relations with. This interaction with others caused him to become kind once again, and over time his desire to get stronger became as much a motivation to never lose as it is to protect his friends and family. In particular, he embraced his responsibility as a member of a branch house to keep Hinata safe, showing greater concern for her than anyone else in combat situations and, ultimately, giving his life to save hers.

Birds were often used to characterize Neji's philosophy and growth: while he felt bound by destiny and the cursed seal on his forehead, he described his personal experiences as being like a caged bird; after being defeated by Naruto, he observed to his father's memory how many birds there were freely flying in the world; when trying to overcome the limitations of his Byakugan, he observed birds at a distance but could never spot the one at his blind-spot; after his death, the Allied Shinobi Force took on a bird formation in his memory.

Neji was born into the Branch House of the Hyena clan to Hizashi, the twin brother of the clan's current head Hiashi Hyūga. When Hinata, the heiress apparent, turned three years old, as customary Neji's previously unmarked forehead was branded with the Hyūga main family's Juinjutsu by his uncle Hiashi. All branch house members carry this cursed seal and Neji believed it to be a symbol that one lives only to serve, and protect the main house.

When word of the murder reached Kumogakure, they demanded Hiashi's body as compensation as per the agreement in the treaty (as his body would hold the Byakugan as well). Konoha wasn't prepared to comply to this request until Hizashi stepped in and offered to give himself up instead. Due to him being bound by the Hyūga main family's Juinjutsu when he died, the Byakugan would be sealed away, thus protecting its secrets. Hizashi made this sacrifice willingly in order to protect his brother, family, and village. However, Neji came to believe that the main branch had forced him to do so. This misconception became the primary basis of his nine year grudge against the main branch and of his concrete view on one's unalterable fate. Neji became hateful towards the members of the main house for what he believed they'd done to his father.

Neji, who previously promised to Might Guy that he would not let the branch family get to him, encourages Hinata to give up not only the match but also the life of a ninja, citing her meek personality and her lack of talent. His piercing analysis of her brings Hinata to tears, but she is motivated to continue by the encouragement of Naruto Uzumaki. In their first exchange of Gentle Fist-blows, Neji seals her tenketsu, causing her attacks to have no effect on him.

Even though Hinata has no ways to damage Neji, she perseveres. He continues to convince her to forfeit and boosts the amount of damage his blows do to her, but Hinata refuses to give up. Finally, after her internal organs are left badly injured and she has difficulty standing, Hinata uses Neji's words against him, arguing that he cares so much about destiny and being worthy of the Hyūga because his own destiny deprives him of the Hyūga's recognition. Neji is enraged and moves to finish her off, but he is held back by Guy and the other observing jōnin. Nevertheless, Hinata collapses and is left in a critical condition from her injuries, Neji is declared the winner, and Naruto, moved by Hinata's perseverance and angered by Neji's actions, vows to defeat him during the finals.

After a month of training, Naruto and Neji face each other. Naruto begins by using shadow clones to engage Neji, trying to overcome his taijutsu skills with sheer quantities. Neji's Byakugan could not identify the shadow clones from the real Naruto and for that reason, Naruto is able to land some blows, but Neji deflects them with Revolving Heaven and then seals Naruto's chakra with Sixty-Four Palms. Neji declares Naruto a failure who is meant to lose to him, a genius. When Naruto refuses to believe him, Neji explains the demise of his father and the differences between the Hyūga's houses. Rather than convince Naruto that he is correct, his words convince Naruto that Neji is wrong, as Naruto has personal experience with persevering despite others' expectations. Naruto appears defeated and Neji, assuming he's won, begins boasting. As he talks, Naruto bursts from the ground beneath him, knocking him out with an uppercut to the chin. Realizing that the Naruto he saw defeated was a shadow clone, covering the hole the real Naruto was digging towards him, Neji scolds himself for being defeated by Naruto's main ability. In response, Naruto reveals that clone techniques were once his poor abilities. Before he's declared the winner, Naruto tells Neji to stop holding his natural genius back with trivial concerns about fate.

Two Kumogakure ninja attempt to abduct an unconscious Hinata during the confusion caused by the invasion of Konoha. The Hyūga Elder reinforces Neji, Tenten, and Kiba Inuzuka to recover her. Once they catch up with them, Neji draws the Kumo-nin away while Tenten and Kiba departs with Hinata. He is able to take one out, but is unmatched for Sekiei's abilities and can only keep him distracted until Hiashi arrives to take him out.

When Sasuke Uchiha deserts the village to Otogakure, the only response the Fifth Hokage is able to organize is the Sasuke Recovery Team, a team of genin led by Shikamaru Nara. Neji, who is recommended for the team by Lee, watches their backs with his Byakugan while they follow Sasuke's escorts, the Sound Four. Kidomaru uses his webbing to bind them. Only Neji, with the refined chakra control courtesy of his Gentle Fist training, is able to cut through Kidomaru's webs. He tells the others to go on without him, not before he warns them that one-on-one fights are probably going to be a continuing trend.

Neji then personally locates Kidomaru and delivers a fatal blow. As he dies, Kidomaru warns that the Recovery Team are unable to bring Sasuke back to Konoha. Neji disagrees, believing that Naruto alone will be able to get though to Sasuke, just as he got through to Neji during the Chūnin Exams.

Neji is left in a critical condition due to his injuries and near death. Konoha eventually sends the Medic Corps after the Recovery Team. Neji is found, brought back to Konoha, and a team of medics mend his wounds using the Healing Resuscitation Regeneration Technique.

When the Fourth Shinobi World War begins, Neji is placed alongside Hinata in the Second Division. Neji and the rest of the Allied Shinobi Forces are reinforced to help Naruto in his battle against the Ten-Tails. Recognizing how important Naruto is to the war's victory, Neji, Hinata, and Hiashi join forces to block attacks towards him. The Ten-Tails' attacks rapidly become too numerous and Neji and Hiashi must break away to protect the other Allies from the Ten-Tails too. In their absence, the Ten-Tails fires several volleys of wood projectiles at Naruto, which Hinata uses her body to defend him from. Neji arrives in time to protect her in turn with his own body, mortally injuring him. Naruto calls for a medic but Neji accepts the fact that he's done for. He collapses over Naruto's shoulder and tells him to not to put his life at risk in the future, as he is now responsible for many other lives in addition to his own, one of which is Hinata's. As Neji watches Hinata shed tears for him, Naruto questions why Neji would throw his life away for him, to which Neji responds that it is because Naruto once called him a "genius". Neji dies, noting that he finally knows what it was like for his father to choose to die for people who are precious to him. Upon death, the Hyūga main family's juinjutsu, sealing his Byakugan. 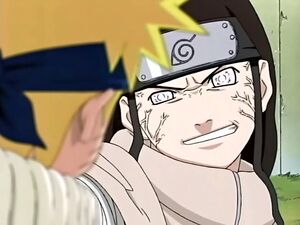 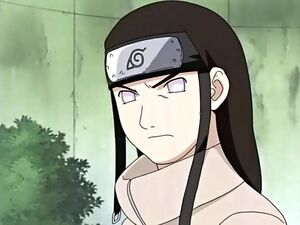 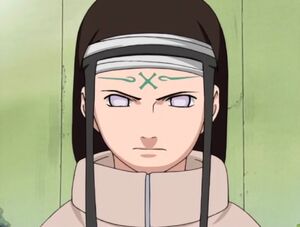 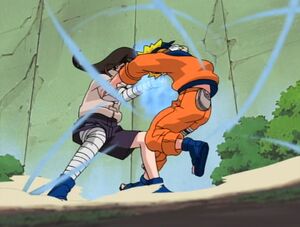 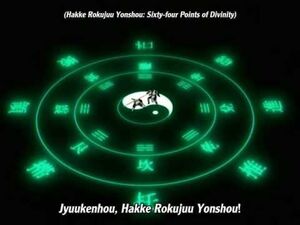 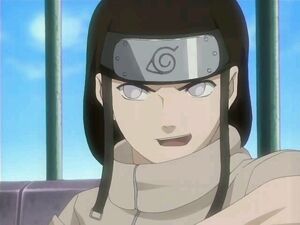 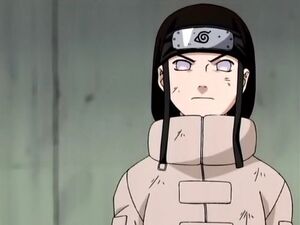 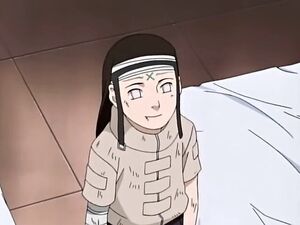 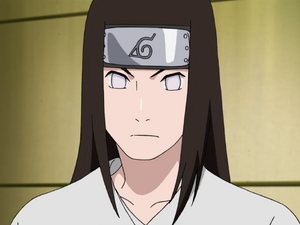 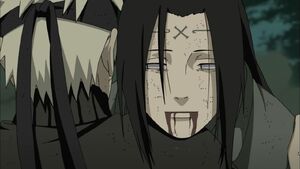