The Nekross are antagonists in the CBBC science fantasy series Wizards vs Aliens. They are an alien race from the planet Nekron led by The Nekross King and later his son Varg and his wife Lady Lyzera (due to the King's retirement). Their food source is Magic and due to this, they were immune to magical attacks but two wizards were able to harm them with their magic: the first being The Archmage of Sirius 12 who turned Nekross after Nekross into dust, the second was a teenage wizard named Jackson Hawke who fought them with Grim Magic. They have extracted Magic from every Wizard and Enchanted creature they have encountered from the Fighting Snakes Nebula to the Black Eye of the Phantom Galaxy and they will stop at nothing to sate their appetite for Magic, which they extract and send back to Nekron to feed their people.

Sometime in 2006, they sent a probe known to wizards as The Entity to Earth to search for Magic. On Halloween that same year, the probe came across a ten-year old wizard named Tom Clarke and tried to kill him but just then, Tom's mother Helen arrived to protect him and shoot magic at the Entity but due to it being Nekross technology, the magic was harmless to it and it fought back and killed Helen. Six years later in 2012, the King, Varg, Lexi and several other Nekross had already extracted magic from every planet except Earth but a now sixteen-year-old Tom along with his unenchanted (non-magical) father Michael, his grandmother Ursula, his best friend Benny Sherwood and a hobgoblin named Randal Moon do their best to stop them from taking Earth's Magic and the Wizards that live there.

Despite being the antagonists for the majority of the series, there have been four occasions when another takes that position: Stephanie Gaunt (Friend or Foe), Mervyn (The Thirteenth Floor), The Prospector (The Secret of Room 12) and Warlock (Twilight Falls).

Nekross have the ability to take on a human form when using Form Filters.

Nekross come in different colours such as brownish gold, red, purple and blue-white. They also have two spiky antenna which some members have an eye and mouth on them. Their clothing is mostly blue armour but sometimes robes or dresses. 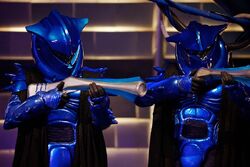 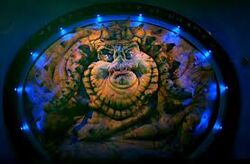 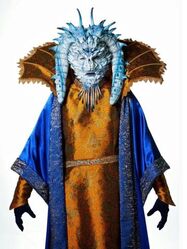 Lady Lyzera
Add a photo to this gallery
Retrieved from "https://villains.fandom.com/wiki/Nekross?oldid=2144871"
Community content is available under CC-BY-SA unless otherwise noted.