Assist the Order of Mata Nui to defeat the Brotherhood of Makuta (succeeded).

Assist Makuta Teridax in his conquest of conquering the entire universe (failed).
Kill Tahu and his allies (failed).
Steal all the Golden Armor pieces to prevent Tahu from retrieving them (succeeded, then failed).

Nektann is a major antagonist that appeared in the BIONICLE series. He makes his first appearance in the story serial, Destiny War as a supporting anti-hero and later as a secondary antagonist in Journey's End. He is a prime Skakdi warlord who manages the population in Zakaz and aided the Order of Mata Nui in their battle against the Brotherhood of Makuta.

When Makuta Teridax have taken control over the Matoran Universe, Nektann willingly became his servant and aided him in his quest to conquer the entire universe.

He was voiced by Scott McNeil who also voiced Onua, Kalmah and Antroz in the movie.

Nektann and the other Skadi were once a peaceful species who dwelled in the island of Zakaz. However when Spiriah  arrived into the island, his experiments granted Nektann the water element and a vision power along with the other Skakdi but they were corrupted by their newfound powers which turned them into a violent and destructive race. Following the incident, Nektann was appointed as a leader of the Skakdi tribe. He situated his base near the coastline of Zakaz.

He later ordered a shipment of automated weapons from Xia. The weapons were later named after Nektann as he was the first to use them.

Nektann appears in the story as he was confronted by Axonn and Brutaka who were captured and brought before him after their fake surrender. Axonn then lied to Nektann that they had spoken to the other Skakdi warlords who agreed to fight against the Brotherhood of Makuta in order to become rich. Nektann agreed to ally himself with the Order to fight against the Brotherhood.

Later, Nektann gathered his army and followed the two Order agents to one of the Southern Islands when they confronted an army of Rahkshi. Nektann and his army fought with the Rahkshi while Axonn and Brutaka find the location on the island. Although the Rahkshi broke through the Skakdi army and took down several forces, Nektann and his forces eventually mustered up enough rage to fight back and decimated the entire Rahkshi army.

When Makuta Teridax have taken control over the Matoran Universe following the reawakening of the Great Spirit, Nektann decided to serve him after he realized that it would be futile to oppose him.

Later, Nektann was assigned to lead the small group of Rahkshi to Metru Nui to defeat the rebellion and moved his Skakdi south to the Southern Islands. Despite his efforts, he fell in line with the Rahkshi to go to the islands.

After a few months later, Nektann and Teridax's army traveled towards the planet of Spherus Magna in order to confront Mata Nui and his allies as he and the army were sent by Teridax to eliminate the Glatorian. They came down onto Bara Magna and engaged Glatorian in the battle. Nektann manages to kill several Glatorian who got into his way before he found the golden shield that was one of the Golden Armor pieces in the sand and took it as his own.

Later when Nektann was still dispatching more Glatorian and Toa along the way, he was confronted by Toa Tahu, who wanted to reclaim the shield. Nektann immediately engaged Tahu in the battle and get him to use only his physical strength in an attempt to fight head on. However when Tahu refused to do so, Nektann was somewhere amused while attempting to make the Toa of Fire to become like his kind. Tahu became enraged and attacked the Skakdi warlord, who grabbed him by his throat to torture him. However, Tahu manages to resist and use his Fire power to melt Nektann's armor thus defeating him and left him on the ground in pain before reclaiming the golden shield from him.

Following the restoration of Spherus Magna, Nektann and the other villains was imprisoned in the new prison created by the Order of Mata Nui.

Nektann was a formidable Skakdi warrior. He respected power as it was shown that he willingly allied himself with Makuta Teridax when the latter have taken control over the Matoran Universe. He also 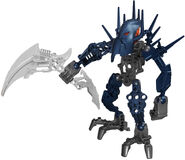 Nektann in his set form.

Nektann fighting with Tahu in the comics. 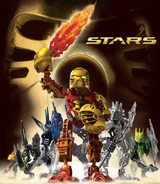 Nektann alongside Tahu, Takanuva, Skrall, Gresh and the Rahkshi of Heat Vision in the Stars poster.

Nektann steals one of the Golden Armor pieces.