Bring forth the Heart of Hades

He sent monsters to destroy the sacred town of Tenton and decimated everyone in it, including the main protagonist, while also kidnapping his or her partner and taking him/her to the world of darkness. The main protagonist will then reincarnate as one of the five races that have taken over the world and will begin a crusade to free the world from evil.

Though a death harbinger, Nelgel's appearance is rather dandified; he's mostly purple with a young man's visage, white long hair and goat-like horns. He wears a green striped costume with purple sleeves and cape and with an animal skull ornament at the chest. He uses a scythe capable of tearing through dimensions. 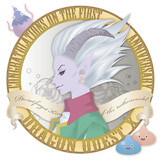 Retrieved from "https://villains.fandom.com/wiki/Nelgel?oldid=3687811"
Community content is available under CC-BY-SA unless otherwise noted.