English Lord; 10th in line to the throne of England

Steal the Imperial Seal of China to allow his subordinate Wu Chow to become the new emperor (failed).

Assassinate the English Royal Family in order to become the new King of England (failed).

Lord Nelson Rathbone is the joint main antagonist in the 2003 film Shanghai Knights and the ally of Wu Chow.

He was portrayed by Aidan Gillen, who also played Petyr Baelish in Game of Thrones, Miles Jackson in 12 Rounds, Janson in The Maze Runner and Paul Serene in Quantum Break.

Rathbone is a highly corrupt English lord who is tenth in line to the throne and greatly wishes to be king. He concocts a scheme with a man named Wu Chow, the illegitimate brother of the Emperor of China, to assassinate the English Royal Family at Queen Victoria's Jubilee Ball and thus leave him the new King of England. Rathbone is first seen when he and his Boxer guards storm the sacred resting place of the Imperial Seal of China in the Forbidden City and successfully steal it. The Keeper of the Seal (the father of Chon Wang and his sister Chon Lin) is stabbed to death by Rathbone with a dagger handed to him by Wu Chow, which Rathbone claims is a "gift from an old friend". He then leaves with his Boxers, and Chon Lin is tasked with retrieving the Imperial Seal by her dying father.

Rathbone is present at a meeting with the British Parliament, where he reveals that trouble is afoot in China before revealing a caged Bengal Tiger as a present to Queen Victoria from the Emperor of China. Rathbone is later seen travelling through London in his carriage with Wu Chow, where they discuss their deal and Rathbone invites Wu Chow to a gala at Buckingham Palace, after handing him back the dagger he had used to kill the Keeper of the Imperial Seal. Meanwhile, Chon Wang and his partner Roy O'Bannon try to break Chon Lin out of prison, after she unsuccessfully tried to assassinate Rathbone. Roy leaves her a pack of playing guards which she eventually uses to pick the lock on her cell and escape.

Wang and Roy don disguises in order to gain entry to the gala, where Wang finally meets Rathbone in person. He and Roy follow him to his private library where they witness him holding the Imperial Seal, but before they can confront him, Rathbone disappears through a secret passageway. Lin arrives and the three of them enter the secret passage, where they find Rathbone handing the Imperial Seal to Wu Chow. Rathbone discovers them and sets the building on fire before making his escape, locking the doors behind him. However, Lin manages to escape through the roof while Wang and Roy find a car parked inside the building, which they use to crash through the doors and drive away.

Rathbone appears again when he and his Boxer guards capture Wang, Roy and Lin and take them to an abandoned pier. Lin is tied up and tortured as Rathbone and Wu Chow interrogate Wang and Roy as to the whereabouts of the Imperial Seal (which had been stolen after Rathbone handed it to Wu Chow). Neither Wang nor Roy are able to tell them where the Seal is, much to Wu Chow's frustration. Rathbone reveals his plan to assassinate the English Royal Family and frame Lin for their murder, before taking Lin away and leaving Wang and Roy to drown. They manage to escape once again thanks to Wang's martial arts skills, while Wu Chow angrily tells Rathbone that their deal is off unless he is able to recover the Imperial Seal.

At the Jubilee Ball, Wu Chow has Lin tied up on a fireworks barge and prepares to assassinate the Royal Family using a Gatling gun, as Rathbone watches from afar. However, Wang and Roy sneak on board the barge and rescue Lin, and Wang manages to prevent Wu Chow from killing the Royals in the nick of time. Wang battles Wu Chow as Roy heads off to pursue Rathbone. After Lin kills Wu Chow with a firework, Rathbone escapes inside Big Ben and Wang and Roy give chase. As Roy searches for Rathbone, the evil lord sneaks up on him and kicks him through the clock face, apparently to his death. An enraged Wang then engages Rathbone in a swordfight, but Rathbone, being the most skilled swordsman in England, easily overpowers him. Rathbone slices Wang several times and taunts him relentlessly, but Wang manages to cut the ropes holding up the platform they are standing on, sending them both flying through the clock face. Wang is saved by Roy, who survived by holding onto the minute hand of Big Ben, while Rathbone plunges a long way to his doom.

Rathbone conversing with his subordinate Wu Chow in his carriage.

Rathbone at a gala in Buckingham Palace.

Rathbone having a secret meeting with Wu Chow.

Rathbone trying to find out how Chon Lin escaped from Scotland Yard.

Rathbone revealing his plans to the captured Wang and his partner Roy O'Bannon.

Rathbone kidnapping Lin and leaves Wang and Roy to drown. 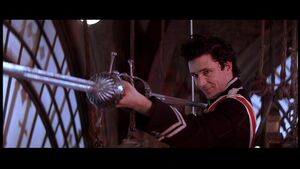 Rathbone falling to his death through the clock face of Big Ben.
Add a photo to this gallery

Retrieved from "https://villains.fandom.com/wiki/Nelson_Rathbone?oldid=4082735"
Community content is available under CC-BY-SA unless otherwise noted.