To kill Hercules (failed)
To cause chaos in the Athens (successful, later sabotaged)
Take vengeance on Icarus (failed)

The Nemean Lion is a minor antagonist in the 1997 Disney animated film Hercules, and the main antagonist of the episode "Hercules and the Hero of Athens" in the TV show Hercules: The Animated Series.

The Nemean Lion appears during the song Zero to Hero. He is one of the monsters sent by Hades to kill Hercules, but he is easily defeated.

The Nemean Lion makes his animated Hercules debut in this episode. After getting bored of Nemea, the Nemean Lion goes to Athens to spread terror. He enters in the Great Hall of Pimentos and attacks the employees, but Hercules hears their screams and comes to their rescue. However, he accidentally destroys the building when he arrives and the Nemean Lion is knocked out and captured. Icarus takes the blame for the damage to protect Hercules, thus making everyone believes that he is the one who defeated the Nemean Lion, including the Nemean Lion himself.

A few days later, the Nemean Lion escapes and returns to Athens in order to take revenge on Icarus. Hercules and Icarus comes to face him and Hercules manages to knock him out again, but Icarus is the one who takes the responsibility for defeating him once again.

The Nemean Lion later escapes one more time and confronts Icarus. However, after a short fight he realizes that it was Hercules who defeated him and tried to eat Icarus. Hercules then arrives and fights the Nemean Lion, who eventually beats him. Before he could kill Hercules, Icarus comes to help his friend and they manages to defeat the Nemean Lion. 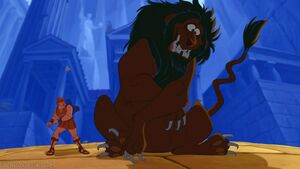 Hercules beating the Nemean Lion in the film. 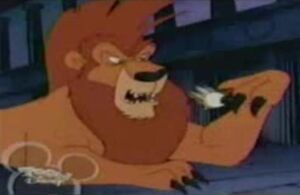 The Nemean Lion in the animated series.
Add a photo to this gallery

Retrieved from "https://villains.fandom.com/wiki/Nemean_Lion_(Disney)?oldid=4182486"
Community content is available under CC-BY-SA unless otherwise noted.