Leader of the Ten Elites

Destroy Seiros and her children

Nemesis, also known as the King of Liberation and the Fell King, is the overarching antagonist of Fire Emblem: Three Houses and the archenemy of Seiros. He is also behind the creation of the Crests, the war upon Fodlan, and the demise of Sothis.

He initially serves as a historical figure for most of the game, but in the Golden Deer route, particularly in the final chapter, Nemesis serves as a much more important figure when he becomes the route's final boss after his unexpected revival by the forces of Those Who Slither in the Dark.

He is voiced by Naomi Kusumi in Japanese version and by Jamieson Price in English version, with the latter also voiced Rudolf from Echoes: Shadows of Valentia and Zephiel in Fire Emblem Heroes.

Nemesis was the leader of an army that opposed Seiros and the Ten Elites during the War of Heroes. He possessed the Crest of Flames and wielded the Sword of the Creator. In Imperial Year 91, the armies of Nemesis and Seiros clashed at the Tailtean Plains. There, Nemesis was confronted and slain by Seiros in single-combat.

Many years after Nemesis died, the newly appointed professor of the Officers Academy, Byleth, is tasked with subduing thieves in the Holy Mausoleum during the Goddess' Rite of Rebirth. The leader of the thieves opens the coffin of the goddess, and removes the Sword of the Creator from it. The thief attempts to use the sword to defend themselves against Byleth, however, Byleth is not only able to easily overpower the thief, but also awakens the sword's power, despite the missing Crest Stone.

The next day, Archbishop Rhea thanks them for dealing with the thieves and protecting the Sword of the Creator, and in reward entrusts the sword with Byleth. Surprised by her decision, Seteth warns Rhea to reconsider, as if someone like Nemesis were to appear again, Fódlan would be consumed by war. Unaware of the history of Nemesis, Byleth asks the two about him.

Seteth and Rhea explain to Byleth that when Fódlan was attacked by wicked gods, the Goddess gifted Nemesis with the Sword of the Creator, and he used its power to save Fódlan, earning the title of the King of Liberation. However, over time, his power corrupted him and he waged war across the land, forcing Seiros to put him down. Rhea trusts that Byleth will not be corrupted like Nemesis and gives the sword to them. Shortly afterwards, Byleth meets with  Hanneman who reveals to them that they are in fact the descendant of Nemesis and inherited the Crest of Flames from him, hence being able to wield of the Sword of the Creator.

The truth of the legend is that Nemesis was never anything more than the leader of a group of bandits who were influenced by the people of Agartha to break into the Holy Tomb and plunder the body of Sothis. The Agarthans then used the blood of Sothis to give Nemesis the Crest of Flames, her bones to make the Sword of the Creator, and her heart to make the Crest Stone. At the Agarthans' command, he would then travel to Zanado and massacre the Children of the Goddess with the sword. The other bandits in Nemesis' group consumed the blood of the fallen Children of the Goddess to gain their Crests; their weapons, the Heroes' Relics, were fashioned from the bones. With the exception of Maurice, those bandits became the Ten Elites of Fódlan legend.

Additionally, Nemesis never had any descendants and he and Byleth are not related by lineage. In reality, Byleth's Crest of Flames manifested as a result of Rhea implanting the Crest Stone from the Sword of the Creator into Byleth's heart in an attempt to resurrect Sothis.

After the destruction of Shambhala, Nemesis is resurrected by Those Who Slither in the Dark and raises an ancient army to fight Seiros once more, accompanied by the remaining Agarthans from Shambhala, slaughtering all in his path as they march towards Garreg Mach. As Shambhala is in Goneril and Gloucester, they are intercepted by Duke Goneril's army, but they easily rout his forces and severely injure him in battle, prompting Count Gloucester to flee upon hearing of Duke Goneril's defeat.

Due to Duke Goneril's army stalling Nemesis, the Alliance Army is able to intercept Nemesis's army at the Caledonian Plateau. They first take down his Ten Elites, who had given him near invincibility; with their deaths, Nemesis could be successfully harmed. He condescends Claude and Byleth for not being able to fight him in single combat, injuring the former after he fires at arrow at him. Byleth then intercepts him; both charge at each other, but the arrow Claude shot earlier pierces his arm, allowing Byleth to kill him, and the remainder of his army dissipates with his death.

In the underground library beneath Gareg Mach, additional details are provided about Nemesis. Notably, it was shown that, after he slaughtered the Nabeteans and gained the Sword of the Creator, he was made (or possibly made himself) king of all of Northern Fodlan. He gained leadership over various clans by offering them greater power (the Hero's Relics), it is implied that these leaders became his Elites when they accepted his offer. It's also shown that he never told at least some of the Elites where the Hero's Relics had come from or what he had done to get them, leaving them at a loss as to why Seiros despised them so much, and regretting that they had allied with Nemesis as while their family and followers were assured safety, they themselves were hunted relentlessly when the tides of war turned after the death of Nemesis.

Nemesis was a violent bandit who was manipulated by Those Who Slither in the Dark; though it is unclear how they persuaded him, it was likely with a promise of godlike power. He is proud of his strength and has a warrior's honor; he condescended Claude and Byleth for not being strong enough to challenge him in single combat. He was apparently unaware of Seiros' identity as a survivor of the Red Canyon until moments before his demise, when she asked if he recalled the massacre as she stabbed him to death. Exacting vengeance on Seiros is his lone fixation once he is resurrected.

His in-game description as an enemy reads: "Under the pretense of liberating Fódlan from a reign of deception, this king rallied his people to arms in the War of Heroes." This and the Wandering Beast referring to him as a "king" suggests that after gaining his powers and his sword, he did manage to become at least a somewhat legitimate king of some kind, and that he motivated people to join him in his attempted conquest of Fódlan. 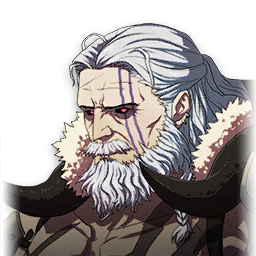 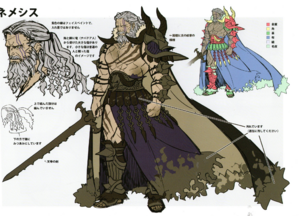 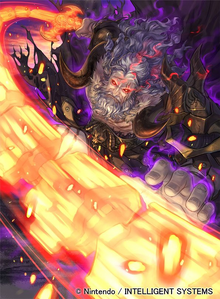 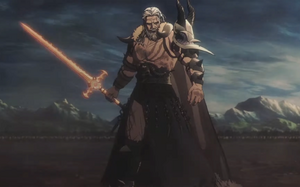 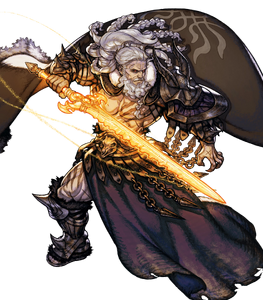 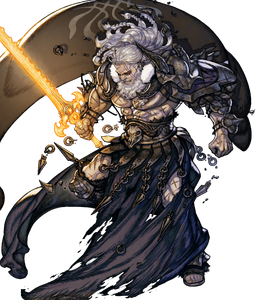 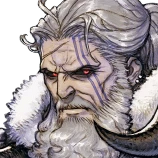 Retrieved from "https://villains.fandom.com/wiki/Nemesis_(Fire_Emblem)?oldid=4162777"
Community content is available under CC-BY-SA unless otherwise noted.