Get revenge on the Polity for failing him.

Kill his copy.
Restore his body.

Nemesis is one of the main antagonists in season 1 of the Rooster Teeth animated webseries gen:LOCK. He was the alternative yet original digitalized mind of main protagonist Julian Chase achieving gen:LOCK with a Holon that was then captured and altered by The Union, resulting in an evil version of Chase whose vengeful mind is trapped in a Holon.

He is voiced by Michael B. Jordan, who also voices Julian Chase and also portrayed Erik Killmonger the one of the main villains in Black Panther.

Julian Chase was a Polity fighter pilot fighting with the Vanguard in their war against the Union. However, during an attack on New York City in 2068, Chase was shot down and was nearly killed. He was saved by the Polity's Experimental Science Unit and Dr. Rufus Weller, who found him compatible for the gen:LOCK program. He was eventually tested and was able to gen:LOCK with an experimental Holon mech, and began rigorous training in combat using his new Holon body.

Chase advanced quickly, and was soon able to join in missions and fight in the war using his Holon, proving exceedingly useful in the effort by defeating many Union forces. However, the Union was fascinated by the program and set out to capture Chase themselves. During one mission, Chase's Holon was overpowered and captured by the Union, stealing away the technology and Chase's mind in the process. Dr. Weller was able to restore Chase's mind to his human body via a backup copy, but they were unable to relocate the captured Chase in his Holon.

Over the next four years, Julain's mind was altered and manipulated by the Union into believing that the Polity had betrayed him, transforming him into an agent of the Union. They subsequently modified and advanced his Holon body, making it larger, adding extra arms, and giving it control over Nanotech.

The Union finally releases their altered Julian Chase Holon by attacking one of the main server centers for The Ether, a massive online virtual reality game system. When the Vanguard and the gen:LOCK 1 Team arrive, the Union Holon attacks and severely injures Cameron MacCloud and fights with Nanotech. The unit flees when reinforcements arrive, but the Polity forces retreat from this unknown enemy.

Later, the Vanguard decide to attack a Union manufacturing plant and save Polity POWs. While they succeed, the Union Holon attacks them as they escape, easily overpowering the gen:LOCK team. A few manage to hit it, only to be stunned when fellow member Julian Chase's voice comes out of it. The Vanguard manage to fight the Holon off and force it to retreat, though everyone is left stunned and untrustworthy of Chase.

Back at the Anvil, Julian Chase approaches Dr. Weller and demands an explanation, to which Dr. Weller reveals that he is the second copy of the real Julian Chase's mind, and the first copy and its Holon was captured by the Union. Dr. Weller explains that the Union Holon is Chase, corrupted by the Union, dubbing it his "Nemesis".

Just then, the Anvil is attacked by the Union, with Nemesis leading the charge. Dr. Weller attempts to reach out to Nemesis and appeal to Chase's mind, but Nemesis is furious and tells them that they betrayed him, ordering them to kill "the copy" (the heroic copy of Chase's mind). The heroic Julian attacks Nemesis, and he literally does battle with himself as the Vanguard and gen:LOCK 1 fight the Union forces. The Union eventually breaches the Anvil, forcing gen:LOCK 1 to retreat back to their human bodies to escape, taking Julian's damaged human body with them as he continues to fight Nemesis.

As they are escaping, Nemesis sees the team with his human body and attempts to stop them, though Chase holds him off. As he begins to overpower Nemesis, the Union launches missiles from one of their Behemoths at the Anvil control tower, and Chase abandons his fight with Nemesis to save it. The Vanguard strikes down the Behemoth, only to discover it was filled with Nanotech, which gets loose and eradicates many exposed people in the Anvil. In the chaos, Dr. Weller is killed and Nemesis escapes.

As the gen:LOCK 1 team attempts to flee, Nemesis somehow keeps tracking them and leading Union drones to their locations. Every time Chase uploads to his Holon, he hears Nemesis' voice mocking him. Cammie realizes that, because Nemesis is Julian Chase in a perpetual state of gen:LOCK, his mind is permanently connected to the gen:LOCK network, meaning he can mentally sense any other uploaded minds. After discovering this, they do not upload and lose Nemesis.

However, Chase feels guilty that Nemesis is himself, his original self. Yasmin tries to comfort him on the way to their destination, but Chase cannot see past his guilt.

The tea eventually land at a secret military base and meet up with Dr. Weller's partners, one being Mark Holcroft. Holcroft briefs the team on what they need to do next: capture or destroy Nemesis so that the Polity and the gen:LOCK program can move forward.

The gen:LOCK team head to Chicago, where the Union is invading, assuming Nemesis will be there. Chase calls Nemesis out and he arrives at supersonic speeds, revealing himself to be upgraded to be bigger, faster, and have more control over Nanotech, using it to create blades, shields, and even lost limbs. Nemesis begins effortlessly fighting back the gen:LOCK team; with him being in the gen:LOCK network, he can sense them and predict their every move. A few members try to mindshare to overpower him, but use too much of their uptime and are forced to retreat back into their bodies. However, Chase abandons his body to keep fighting Nemesis and ensure that his team can return safely. Nemesis overpowers chase and traps him under debris while simultaneously battling him in the mindscape. Chase tries to show Nemesis memories of his family and new friends, but Nemesis rejects them, then goes to the team's ship to kill them off.

As Nemesis arrives, he is stalled by Leon, using Sinclair's Holon. He overpowers him, but sees his former lover Miranda and hesitates, allowing Chase to tackle him. Chase realizes that he does not have to worry about uptime anymore and activates all of his mods, allowing him to even the fight. The rest of the gen:LOCK team uploads again, and offer to mindshare with all five of their minds. Chase is resistant at first, fearing that his new, isolated mind may fall like Nemesis', but the team tells him that, unlike Nemesis, Chase will not be alone. They mindshare and overpower Nemesis, both physically and in the mindscape. Cammie is able to get into Nemesis' mind and remove his ability to control Nanotech, rendering him weakened. They all gang up on Nemesis and destroy his Holon, with Chase delivering a killing blow with a blade.

As Nemesis begins to die, Chase holds him and asks what he is supposed to do. Nemesis, in his last moments, reveals that he, too, is a copy, and that thousands more copies of the original Julian Chase are still under the Union's control. He then dies, his mind vanishing and his Holon deactivating.

Nemesis is the original digital version of Julian Chase's mind, meaning that he has the same determination, strategy, and drive as his true self. However, after brainwashing and manipulation by the Union, he believes the Polity to be traitors and seeks revenge on them. He is a dark version of the true Chase (ironic as he is the true Chase in a digital form inhabiting a mechanical body), and is the result of Chase being allied with the Union as opposed to the Polity. Because of his different allegiance, he is far more violent and wrathful than what he was originally like, and what the copy Chase continues to be. 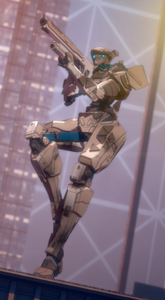 Julian Chase's Holon prior to being turned into Nemesis.

Nemesis as he is represented in the mindscape. 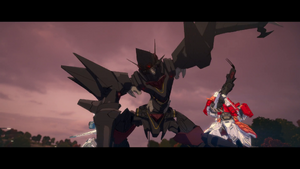 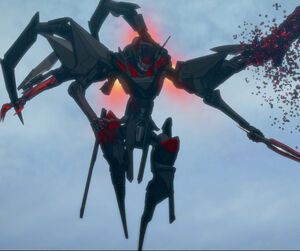 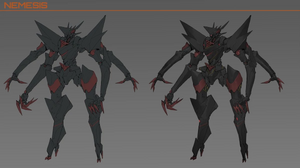 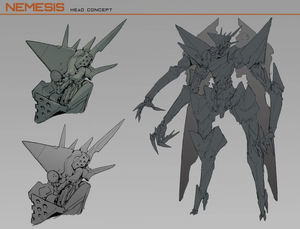 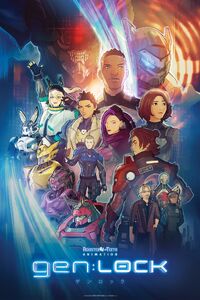 Nemesis on gen:LOCK promotional material.
Add a photo to this gallery
Retrieved from "https://villains.fandom.com/wiki/Nemesis_(gen:LOCK)?oldid=4206324"
Community content is available under CC-BY-SA unless otherwise noted.