Being a perfect copy of Optimus

Slaughtering any Transformer in sight regardless of alignment.

Cause as much death as he can (Transformers: Armada).

Nemesis Prime is a major antagonist from the Transformers franchise. He is an evil clone of Optimus Prime, the leader of the Autobots. Sometimes, he is either affiliated with the Decepticons or a different character entirely with no faction but affiliated with Unicron.

Being a clone of Optimus, he possesses his powers and skills, as well as his appearance. However, unlike his good-hearted counterpart, Nemesis Prime is a cold-blooded being that lacks Optimus' morality and mercifulness.

In Transformers: Prime, Nemesis was voiced by both Peter Cullen and Clancy Brown, the latter also voicing Silas in the same series, and being the famous voice of Mr. Krabs in SpongeBob Squarepants, Rahzar from the 2012 Teenage Mutant Ninja Turtles series, Hades from the God of War series and Lex Luthor in the DC Animated Universe. In Transformers Armada, Nemesis was voiced by Paul Dobson, who also voices Sideways in the series.

In the anime Transformers: Armada, Nemesis is depicted as an enigmatic sociopathic Transformer who only wants to murder everything in sight, Decepticon and Autobot alike. Wanting as much power as he can get, Nemesis copied Optimus's abilities after being created by Unicron, a malevolent god. As Nemesis solely constructed from beligerence, the Decepticon con-artist Sideways easily manipulated him into becoming his puppet, but Nemesis was eventually destroyed via the combined efforts of Optimus and Megatron (who goes by the name of Galvatron).

In the Prime canon, Nemesis was created by anti-US government organization M.E.C.H., made specifically to be identical to the all-powerful Optimus Prime. Nemesis was created when a complete scan of Optimus's structure, the analyzation of Breakdown's structure, and dealing of the traitor Starscream's energon combined, forming a malevolent robotic humanoid that can transform into a slick black trucker.

Later, Nemesis confronted an army of Autobots, but defeated them all before taking on Optimus himself. While Nemesis had the advantage as he was incapable of feeling pain, Silas, the man controlling Nemesis, was forced to vacate his pilot seat in a fist fight, rendering Nemesis immobile. Optimus then finally destroyed his evil twin.

In Transformers: The Last Knight, Nemesis Prime is actually a brainwashed Optimus Prime. After Optimus crash landed on Cybertron, He encountered Quintessa, who revealed to him that Earth was in fact Unicron, and ordered him to retrieve her staff, which would drain Unicron's lifeforce, and restore Cybertron. She brainwashed him into becoming her servant, naming him Nemesis Prime, When Optimus's eyes turned purple, he took on the identity of Nemesis, and vowed that no one would stand in his way. Nemesis Prime arrived back on Earth in the Knights of Iacon's ship and slew two of them before demanding that Viviane Wembly hand over the staff. His former ally Cade Yeager tried to reason with Optimus but Nemesis Prime reasserted his identity and claimed to serve only Cybertron.

Santos opened fire on Nemesis, who swatted the TRF aside with his shotgun and exited fight only for Cybertron and its people. Once Viviane had the ship, Bumblebee fought with Nemesis atop of it as it came to the surface. Bumblebee managed to get the better of his former leader, and Cade attempted to persuade him to stop fighting. As the ship rose out of the water, Nemesis got the upper hand and prepared to kill Bumblebee, until he managed to talk to Prime with his own voice. Hearing Bumblebee's voice after so long shocked Optimus back to his senses, and he shook off Quintessa's programming. Optimus was left horribly guilty for his actions, and was nearly killed by the surviving Knights, which he was willing to accept, until his friends talked them out of it.

In the War for Cybertron Trilogy Nemesis Prime is depicted as Optimus Prime's potential future self, whom has been reformatted into a Herald of Unicron. He serves as a cameo character in Earthrise and one of the two main antagonists (alongside Galvatron) of Kingdom. 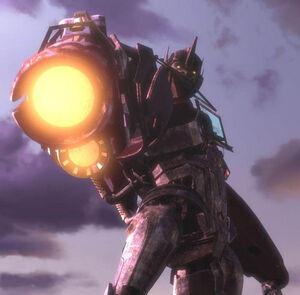 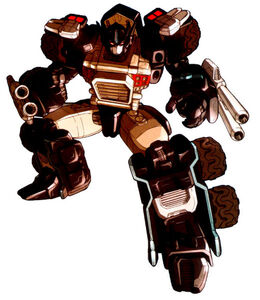 Nemesis as seen in Transformers: Armada 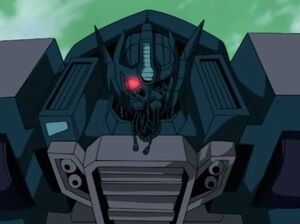 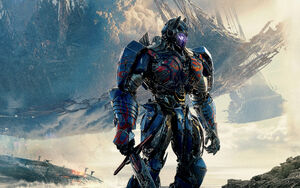 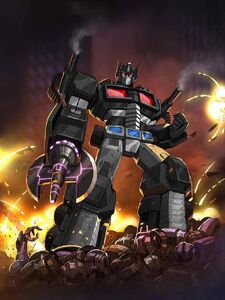 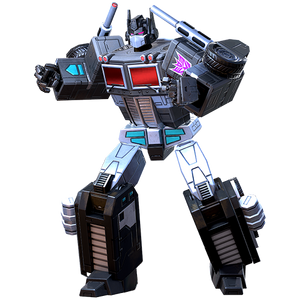 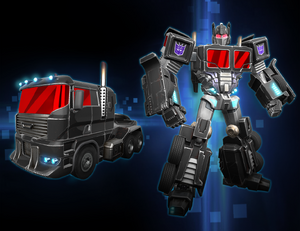 Nemesis in Transformers: Forged to Fight. 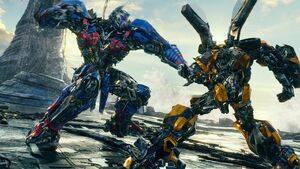