To help the Yuuzhan Vong Empire.

Nen Yim is a female Yuuzhan Vong in the New Jedi Order series. Featured in Edge of Victory I: Conquest as one of the main antagonists. She was depicted in later novels as a relatively minor villain until her final appearance in The Final Prophecy, where she was redeemed and subsequently murdered.

As with most Yuuzhan Vong, little is known about Nen Yim's early life. However, it is known that, like most of them, she was raised aboard a worldship Baanu Kor and had never before seen a living world until her arrival on Yavin IV. Unusual for the devout Yuuzhan Vong, Nen Yim is a being of science and, as such, was seen as somewhere in between the religious Harrar and the atheist Nom Anor. A pragmatic sentient, Nen Yim was equally scornful of the True Way and the Force. It was these heretical views that originally attracted Master Shaper Mezhan Kwaad's attention. Nen Yim believed her people was not ordained to rule the galaxy, but were part of a larger collection of organisms, a scandalous idea for her people.

The Edge of Victory duology

Nen Yim first appeared in the seventh installment in the series, Edge of Victory I: Conquest. She was chosen by Master Shaper Mezhan Kwaad as an adept for her heretical beliefs, as Kwaad shared Yim's belief that the Yuuzhan Vong were not ordained to rule the galaxy. In this novel, Kwaad and Yim were assigned with the task of finding the source of the Force. To do so, they captured Jedi Padawan Tahiri Veila. With Yim's help, Kwaad would try to map the Jedi's nervous system. They discovered that Force sensitivity was not achieved through biological or mechanical implants, which only further mystified them. Meanwhile, the heretical shapers tried to use illicit shaping protocols to transform Veila into a Yuuzhan Vong. It was on Yim's memories in which the fictitious Riina Kwaad was based. The further Yim examined Veila, the more she began to doubt the True Way—there was no knowledge on human anatomy, which made no sense, as all life was supposed to have been created by Yun-Yuuzhan. After Yim confessed her doubts to her Master, Kwaad revealed that she bore the same doubts. Together, Yim and Kwaas journeyed down the path of heresy. However, after Tsun Q'el led Yim to believe he was a heretic, the Adept inadvertently outed her Master. By this point, Veila began to believe she was Riina Kwaad. At the climax of the novel, Jedi Padawan Anakin Solo, who had formed an unlikely alliance with former Yuuzhan Vong Commander Vua Rapuung, now a Shamed One, arrived to rescue Veila from imprisonment, an event that occurred simultaneously with Kwaad's arrest. Rapuung, a onetime lover of Kwaad, coerced the Master Shaper into confessing that she was responsible for his appearing Shamed. As Kwaad confessed, she denounced the gods and killed a few of the warriors. It was then that Veila seemed to recall who she was and betrayed the Yuuzhan Vong, beheading Kwaad with Solo's lightsaber. Following this, Rapuung sacrificed himself to ensure the Jedi's escape.

Nen Yim continued to appear in the following novel, Edge of Victory: Rebirth, continuing to work against the mainstream Yuuzhan Vong religion. As she was doing so, she was placed under the service of the abusive Master Shaper Kae Kwaad, supposedly because Supreme Overlord Shimrra Jamaane was placing her under closer scrutiny after Kwaad's downfall. Working under Kaw Kwaad's nose, Yim discovered the enigmatic eighth cortex was actually devoid of information, suggesting that the gods left their children, the Yuuzhan Vong, with no guidelines on how to proceed. This was the discovery that alerted Shimrra's attention, in the first place. At some point, during the novel, Jedi Padawan Jaina Solo, tricked by Jedi Knight Kyp Durron, led a raid against a Yuuzhan Vong worldship. When Yim learned about the pointless genocide carried out by the Jedi, she was enraged. Later in the novel, Yim began to contemplate whether it would be better to kill Kae Kwaad. When she actually attempted to assassinate the Master Shaper, her attempts were deflected by Kwaad. In the final chapter of the novel, Kae Kwaad (revealed to be merely an alias for Onimi, familiar to the Supreme Overlord) led Yim to his "master"—Supreme Overlord Shimrra. Yim was subsequently escalated to the rank of Master Shaper, and from that point on, she served as the Supreme Overlord's personal shaper.

Nen Yim made next appearances were relatively minor in the eleventh and twelfth installments of the series, Enemy Lines I: Rebel Dream and Enemy Lines II: Rebel Stand. During the duology, Nen Yim was borrowed by Warmaster Tsavong Lah, who was suffering because the radank claw he had previously implanted was being rejected by his body. Yim helped the anxious Warmaster prove that this was merely a ruse cooked up by someone to control him. The culprit would later be revealed to be Executer Nom Anor.

Nen Yim made her next appearance in the fourteenth installment in the series, Destiny's Way. This was the novel in which her master Shimrra (clandestinely Onimi) became the main antagonist. During the course of the novel, recurring antagonist Nom Anor discovered the truth of the eighth cortex after he followed Onimi to Yim's laboratory. This was something Anor would later try to exploit. During the course of the novel, Yim tried to discover a solution to the yammosk-jamming the Galactic Alliance and the Jedi were using against the Yuuzhan Vong. Following the disaster of Ebaq 9, Anor fled in disgrace. In subsequent novels, she would be seen briefly in Shimrra's court.

Nen Yim made her final appearance in the penultimate installment of the series, The Final Prophecy. This was the first novel to feature her as a major character since Edge of Victory: Rebirth and was written by the author who created her, Greg Keyes. in this novel, Nen Yim became less of an antagonist and more of an antiheroine. At the start of the novel, Nen Yim was given by Onimi the task of examining a vehicle from a strange world known as Zonama Sekot. in examining the vessel, Yim discovered that the ship was a hybrid of Yuuzhan Vong and "infidel" technology. She longed to see the living world in which it derived, something she secretly confessed to High Priest Harrar. While speaking with Harrar, Yim began to suspect that Shimrra was a fraud. His fear obvious fear of the living world only solidified her views, and Yim set out to find the world herself. During this time, she reunited with her onetime prisoner Tahiri Veila, since escalated to the rank of Jedi Knight. After being communicated with Yuuzhan Vong heretic Yu'shaa, Veila and the elder Jedi Knight Corran Horn agreed to transport Yu'shaa and Yim to the living world. Using the Sekotan vessel, Yim, accompanied by Yu'shaa, Harrar, and the Jedi, escaped Yuuzhan'tar and made way for Zonama Sekot. While traveling, she and Veila compared their views on science and the Force.

Upon arriving to Zonama Sekot, Yim developed an epiphany and realized that everything believed by the Jeedai heretics was true. After communicating with Sekot, she realized that the Yuuzhan Vong had long lost their way. Through Sekot, she was able to recall their lost homeworld Yuuzhan'tar and how it was be destroyed. She remembered that the True Way was manufactured in response after the Yuuzhan Vong lost their symbiosis with their living planet, living them in eternal pain. She discovered that the reason the eighth cortex was empty was because there was nothing more. Ever protocol provided them by the "gods" was actually information provided to them by Yuuzhan'tar during the Cremlevian War; the gods were merely created from memories of the Force which had long been lost to them. However, before she could fight to redeem her people, Yim was assassinated by Nom Anor, revealed to be the true identity of Yu'shaa, in plot to destroy Zonama Sekot and regain favor with Shimrra. Fortunately, Yim's goals would be achieved by her colleague Harrar in the final novel.

Onimi recruited Nen Yim to be his personal Master Shaper in Shimrra's court. 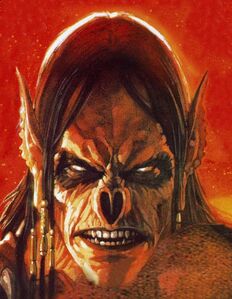 Nen Yim helped prove that Tsavong Lah was being deceived. 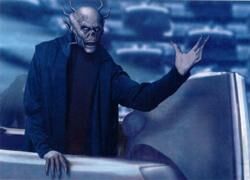 Nom Anor, Nen Yim's killer.
Add a photo to this gallery
Retrieved from "https://villains.fandom.com/wiki/Nen_Yim?oldid=4162320"
Community content is available under CC-BY-SA unless otherwise noted.