Flirting with and seducing men.

One of the many stand users hired by Dio Brando to kill Jotaro Kujo and his group, Nena first appears as one of the many deluded girlfriends of Hol Horse. When Hol Horse is cornered by the group and about to get killed by Polnareff, Nena jumps on him and holds his legs, allowing Hol Horse to flee. As Polnareff attempts to move, Nena scratches her elbow, so Joseph makes a curative on her. Though he never notices, a drop of her blood ends on his arm.

The group takes Nena with them, as they travel to Varanasi. Soon, Joseph notices a wart on his arm (which Polnareff jokingly says it looks like it has a face), so Joseph goes to a doctor to see what it is. The doctor attempts to remove it, only to be slashed by his own scalpel. As Joseph looks at the wart, it talks to him, revealing itself as a stand called The Empress, intending to kill him. As a nurse enters the room and sees the dead doctor, the Empress revel all of Joseph's information as if she was talking in his place, forcing Joseph to flee the place as to not have to confront the local authorities.

While Joseph runs around the town, Nena walks around with Polnareff as to avert his attention, attempting to seduce him. The Empress starts growing more and more, eventually being able to reach Joseph's neck and attack him directly. During their fight, Joseph is knocked over a merchant's stand, but he keeps on running until he finds a drum with coal tar, which he puts his whole arm on, but the Empress attacks him with a nail. While Joseph attempts to hold the nail, the coal tar dries and hardens, paralyzing the Empress, so he reveals he had made a map on the sand with his Hermit Purple when he was knocked over. Joseph then uses His Hermit Purple to remove the Empress from his arm, destroying it. As he does this, Nena regurgitates and reveals her true hideous appearance, ending up dead on the ground, shocking and traumatizing poor Polnareff who was just flirting with her, realizing she was an enemy (and a very ugly enemy at that).

The rest of the Crusaders try comically to bring Polnareff back to his senses.

Nena's stand, Empress, appears as a wart made out of Nena's own blood. The stand will quickly grow, eating food whenever possible to grow faster. Once it has grown enough, it will attempt to kill it's host and probably eat it as well. 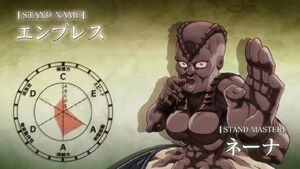 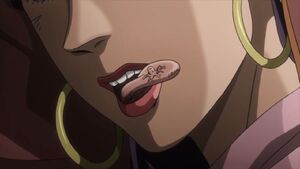 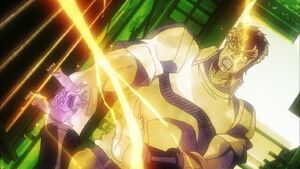 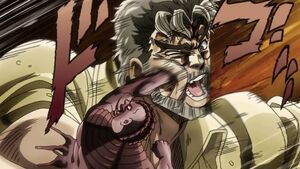 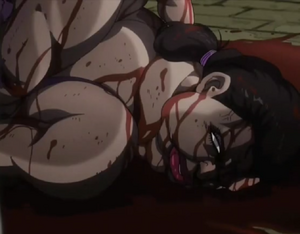 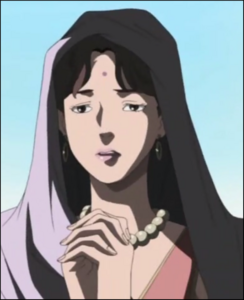 Nena in the OVA. 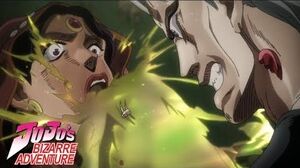