Unleash the C-Virus on the entire world and destroy human civilization.

Neo-Umbrella is the main antagonistic faction of Resident Evil 6. It was a ruthless bioterrorism organization which was secretly founded by Carla Radames, who at the time posed as Ada Wong. The organization's name, "Neo-Umbrella", was used to indicate an apparent connection to the notorious Umbrella Corporation, which collapsed after it was found liable for damages in 2003 following the Raccoon Trials verdict, and used to inspire fear into the hearts of the organization's enemies. Neo-Umbrella's main goal was to destroy the current world order and replace it with a new one, where chaos and anarchy reigned supreme.

While Neo-Umbrella appeared not to have a symbol of its own, its logo can be seen during Jake Muller's campaign on the Neo-Umbrella Medical Facility. As evidenced by the ID Medals, Neo-Umbrella's logo is equal to that of the Umbrella Corporation (itself based on the Spencer facility emblem), except that the logo's red stripes are black.

After the order to sterilize Raccoon City through the use of a nuclear missile was given by the President of the United States, Derek C. Simmons, the national security advisor and head of The Family recognized the potential of B.O.W.s in modern warfare, he decided to create his own B.O.W. development program. Using the Family's nearly unending resources, he commissioned the creation of several laboratories and research facilities across the globe. However, little to no progress was made until Derek Simmons recruited Carla Radames, a young but brilliant genetics graduate.

In 2001, Carla Radames began her research on what would become the C-Virus. Combining an enhanced sample of the T-Veronica Virus, which Carla called the "T-02", and a sample of the G-Virus, Carla managed to create the "perfect virus" -The Chrysalid Virus - which would become the B.O.W. development department's greatest asset. For her success, Carla was made top researcher within the B.O.W. development department. However, Derek Simmons' fascination with Ada Wong, Simmons' most loyal agent who had abandoned him after witnessing the destruction of Raccoon City, grew to become an obsession. Using the C-Virus, Simmons would try to clone Ada Wong for a period of 10 years, which resulted in 12,235 failed experiments due to lack of appropriate genetic structure.

On April 30, 2009, Derek Simmons used Carla Radames as the test subject for yet another attempt to clone Ada Wong. Surprisingly, due to Carla's appropriate genetic structure, Simmons succeeded in creating a sentient, near-perfect clone of Ada Wong. Although the clone had lost all memory of her life as Carla Radames, a small fragment of Carla's mind managed to survive the experiment, which would later come to regain control of its body. Carla Radames lived once more, and swore revenge on Simmons for ruining her life.

In order to get revenge on Derek Simmons for ruining her life, Carla schemed to destroy the current world order, which Simmons and The Family had worked so hard to create, and replace it with a world filled with chaos. To that end, Carla used her influence in the B.O.W. development department to commission the creation of immense research facilities to further her plans. She also gathered a great number of followers, sadistic and cruel researchers who shared her vision of a world where chaos dominated. This was the start of Neo-Umbrella.

In 2012, during the Edonian Civil War, Carla Radames supplied the Edonian Liberation Army's mercenaries with syringes containing the C-Virus, claiming they were energy boosters which would greatly aid them in battle. Upon infection, the mercenaries mutated into J'avos, drawing the attention of the BSAA, who sent Chris Redfield and his team to deal with the situation.

Carla Radames was intercepted by the BSAA agents. Claiming that she was an innocent that had been taken hostage by Neo-Umbrella operatives, she lured Chris's team into a trap, in which she used a needle bomb to infect Chris's teammates and separating Chris and Piers Nivans from the rest of the team. She used the combat data she had gathered to further her plans.

Meanwhile, Ustanak, a monstrous beast given birth by the C-Virus was sent after Jake Muller by Carla. Ustanak succeeded in capturing Jake Muller and Sherry Birkin, who was sent to protect Jake. The two were then taken to a facility in China, where they were experimented on.

During the year of 2013, Adam Benford, the President of the United States decided to tell the world the truth regarding the Raccoon City Incident. He travelled to Tall Oaks to give a speech within the walls of Ivy University. However, Derek Simmons foresaw the consequences of the president's decision (with the United States losing its influence worldwide) and plotted a cunning ruse to infect Tall Oaks with the C-Virus by unleashing several Lepotitsa creatures into the city which would infect the president in the process, making him just one of many casualties and preventing him from making his speech.

Simmons' plan succeeded in preventing the president from telling the truth about Raccoon City. However, all of Simmons' attempts to prevent chaos from spreading were ruined when Neo-Umbrella claimed responsibility for the attack and started a worldwide bioterrorism attack.

Lanshiang was Neo-Umbrella's first target. The city was completely overrun by J'avo creatures which quickly caused several casualties, many of them civilian. The BSAA was later sent to help the citizens evacuate the siege city.

Six months after their capture, Jake Muller and Sherry Birkin successfully escaped Neo-Umbrella's Medical Facility. However, thanks to Jake Muller's blood Carla Radames was able to create an enhanced form of the C-Virus, which she used to infect Derek C. Simmons as revenge for what he had done to her. Despite having managed to get her revenge, Carla Radames was shot down by a member of The Family and fell to her death. But her dreams of worldwide anarchy didn't die with her, as she managed to remotely activate Neo-Umbrella's Plan D, which consisted of attacking Tatchi with a C-Virus warhead which would turn Lanshiang's entire population into zombies. But the main goal of Plan D was to unleash Haos, a powerful B.O.W. created by Neo-Umbrella and capable of infecting the entire planet upon the unsuspecting population.

The plan was successfully carried out and Tatchi was infected with the C-Virus, turning the entire population into zombies, including the BSAA agents sent to help the citizens escape. Haos was awakened, though it was only 70.3% complete. In spite of all odds, Chris Redfield and Piers Nivans managed to beat the vicious B.O.W. and prevent it from escaping the Neo-Umbrella Deep Sea Facility.

With its leader dead and The Family under the command of a new, unknown leader, it was made clear by a member of The Family that Neo-Umbrella wouldn't be left standing for long, though the bioterrorism organization's fate remains unknown. However, instead of completely falling into ruins, some of Neo-Umbrella's remnants was later taken over by Glenn Arias. 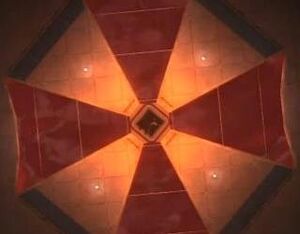 The symbol of the terrorist group Neo-Umbrella with derek's blood. 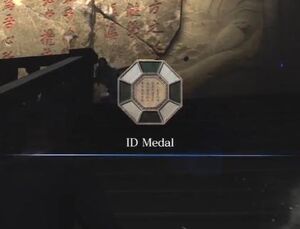 A Neo-Umbrella logo illustrated in the ID Medal. 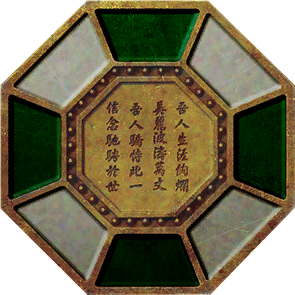 Close up of the in game model for the ID Medal.