Cause as much chaos and mayhem as possible.

Marian Drews, later known as Neo Joker, is the main antagonist of the 2018 Batman: White Knight comic series. She was a stand-in henchwoman for the Joker after Harley Quinn left him, but later turned into a full-time supervillain after the Joker redeemed himself and took back his former identity of Jack Napier, trying to draw out Napier's insanity and reclaim Gotham with him at her side once more.

Marian Drews was once a bank teller who suffered from severe depression after her boyfriend left her and would badly cut herself under the counter to see how many customers she could serve before bleeding to death.

One day Marian was held up at gunpoint by the Joker which made her realize how much she really wanted to live. Joker then forced her to help him with the bank robbery and soon started calling her Harley, presumably because of her resemblance to the real Harley Quinn. Fearing for her life, Drews played along and eventually escaped with Joker to his hideout where he gave Marian Harley's costume to wear.

Marian felt that Joker saved her from killing herself that day and was actually happy to remain at his side despite the abuse he made her suffer. Even after the real Harley left him, Drews stayed because she believed being with Joker was the only happiness she ever had.

After recovering from his Joker persona, Jack Napier returned to his hideout where he was greeted by Marian as Harley Quinn. Jack managed to explain to her that he was sorry for all the abuse he had dealt to her over the years and wanted to make things right. He then proposed to "Harley" by slipping an engagement ring on her finger. At first Marian thought this was all a joke, but when Jack actually referred to her as puddin', she started to realize the truth and, in her anger, assaulted him. Drews held Jack down, telling him he doesn't need to be sane and that all he needs is her before suddenly being knocked aside by the real Harley Quinn. The real Harley told Marian that she only fell in love with Jack's insanity and that he doesn't need her anymore. Vengeful and determined, Marian decided to try and find a way to bring back Jack's Joker persona while she "fills in" for him as a Neo Joker.

Marian stumbled upon a gathering of super-villains who have all been placed under mind control by Jack Napier, and freed the Mad Hatter from his entranced state. The Hatter explained that Jack used his technology to brainwash Clayface who was ordered to ground his own body to dust, leaving only his brain behind. The dust was then inhaled by the other villains in the room which made them susceptible to commands of the person controlling Clayface’s brain. Marian wanted to use Jack’s small army of criminals to cause chaos in Gotham City and try to make Joker resurface, but the Mad Hatter decided to help her cause even greater mayhem. 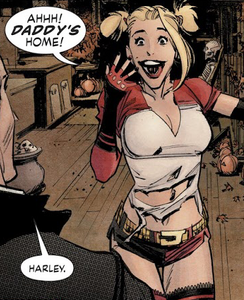