Render Earth uninhabitable to force humanity to migrate into space and theoretically speed up the evolution of humans into Newtypes.

Neo Zeon is a restoration of Zeon serving as the main antagonistic faction of the film Mobile Suit Gundam: Char's Counterattack, with the remnants of the organization serving as the villains of the OVA, Mobile Suit Gundam Unicorn. It is a movement founded and led by Char Aznable with the expressed goal of forcing humanity to migrate into space, by whatever means necessary, to further their evolution into Newtypes, thus fulfilling the ideals of Zeon's original founder and Char's late father, Zeon Zum Deikun.

Char's Neo Zeon was only the second movement to bear the name of "Neo Zeon", with the first Neo Zeon being the one founded at Axis and led by Haman Karn. As such this Neo Zeon is often referred to as the Newborn Neo Zeon, to differentiate it from its predecessor. They were made up primarily of surviving members of Axis Zeon, former members of the Anti-Earth Union Group and other Spacenoids seeking to fight the Earth Federation.

Neo Zeon was founded by Char several years after he had gone into hiding following the end of the Gryps War. Char set up base at the Sweetwater colony, where he was welcomed with open arms by the many refugees who had gathered there. Proclaiming himself the true heir of Zeon Zum Deikun, Char vowed to fulfill the ideals of the late father by any means necessary. Char's message attracted not just surviving members of the original Zeon and Axis Zeon, but also other Spacenoids who believed in Deikun's original ideals of Spacenoid and colonial independence from Earth. They emerged in U.C. 0093, five years after the end of the First Neo Zeon War, when they declared war on the Earth Federation, kickstarting the Second Neo Zeon War.

In order force humanity to migrate into space, Char decided drop a series of asteroids on Earth, causing a nuclear winter to erupt on the planet and render it uninhabitable. The final asteroid Char planned on dropping was the Axis asteroid, headquarters of Axis Zeon, which would render the Earth completely inhospitable and leave the surviving humans on it with no choice but to move into space. However, Char's plan was foiled by the Londo Bell taskforce and Amuro Ray, who managed to destroy the asteroid before it could collide with Earth. Amuro and Char both lost their lives the end of the conflict when they fought each other in a final battle, which Amuro won.

However, despite its downfall, surviving members of the Newborn Neo Zeon would form pockets of resistance to carry on the fight. The remnants of the organization later reorganized into a third Neo Zeon movement nicknamed "the Sleeves" and waged war against the Earth Federation in U.C. 0096. The Sleeves fell under the leadership of Full Frontal, a Cyber Newtype clone of Char Aznable specifically created to lead it. 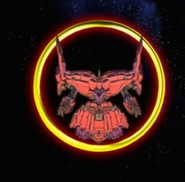