Villains Wiki
Register
Don't have an account?
Sign In
Advertisement
in: Articles under construction, Infobox Update, Article stubs,
and 38 more

Nephrite is a major antagonist turned anti-hero in the first arc in the Sailor Moon manga and anime series. He is the second of Queen Beryl's Four Kings of Heaven.

Nephrite first appears following Jadiete's defeat, taking over the operation to find the legendary Silver Crystal while avenging his comrade. His first mission had him assume the guise of Princess D's bodyguard, assuming her family has the crystal as he used a Youma created from his shadow to possess the girl. But after that failed, Nephrite created a Youma from a bridal mannequin to steal life energy from people in love. This act resulted in his defeat by the awaken Sailor Jupiter, though Sailor Moon Crystal had Nephrite survive the encounter as he and the other Kings of Heaven learn the truth of their past lives before Queen Beryl fortified her hold over them. While he and the other kings fend off the Sailor Guardians from entering the Dark Kingdom's stronghold, revealed to Sailor Jupiter's lover in their past life, Nephrite ended up being vaporized by Queen Metalia alongside the other kings when they were freed and no longer being of use to her. But the four stones that the Four Kings of Heaven were reduced to end up in Mamoru's possession with the quartet's spirits now able to resume their duty as his protectors and advisors.

Like Jedite (Jadeite), Nephrite's evil plans revolve around taking energy from people in order to awaken the Negaforce. Unlike Jedite, who took energy from several people at once, Nephrite took energy from one person, but got more than Jedite could off one person. Or at least he would have, had Sailor Moon not foiled all of his plans. Neflite uses a star crystal to see whose energy will reach its peak. He usually pretends to be a millionaire named Maxfield Stanton (Masato Sanjouin) and implants the essence of a Negamonster into an item that is close to that particular person. When their energy reaches its highest point, a monster appears, but the energy is returned when the monster is destroyed.

Neflite first appeared in Episode 10 after Jedite's eternal slumber. In Episode 11, he tried his first evil plan. These involved a girl's tennis raquet (Tensie), Mr. Baxter's plant (Petasos), Miss Lambert's wedding dress (Black Widow), Peter's camera (Kyameran), Mika's doll (Jumo), and Lori's pencil (Gemini Warriors). All of these monsters were destroyed by Sailor Moon. Once Neflite summoned Leo the Lion and attempted to use Tuxedo Mask as Sailor Moon's weakness so he could kill her, but failed. In Episode 18, Beryl started looking for the Imperium Silver Crystal, so Neflite had a monster named Soul Shadow possess Princess Diamond, believing her to be the Moon Princess. This plan failed when Soul Shadow was destroyed.

Nephrite does not get along with Zoycite (Zoisite), another Negaverse general, who enjoys seeing his plans get foiled and wants her own turn. In Episode 19, Molly (Naru) fell in love with Nephrite, and still loved him even after realizing how evil he was, when the Sailor Scouts fought him. They defeated him, but before Sailor Moon could destroy him with her tiara, Molly jumped in front of him, forcing him to stop. When one of Zoisite's monsters Yasha attacked Molly, Neflite protected her from her attack. Yasha was about to kill Neflite, but was killed by Sailor Moon before she got the chance.

In Episode 20, Neflite's black crystal reacted to Molly, which confused him as she had nothing to do with the silver crystal. He soon discovered that Sailor Moon was really Serena Tsukino (Usagi), but before he could attack her, he sensed that Naru had been kidnapped by three of Zoycite's monsters, Housenka, Grape, and Suzuran. Neflite fought the monsters off to save Molly, and nearly killed Housenka in the process. He would regret not doing so later, as sometime after they left the building and Molly bandaged a cut on Neflite's arm, the monsters returned and Housenka stabbed him in the shoulder with thorns from her arm. He received more injuries from Grape's fireballs while protecting Molly from her. Though the monsters were destroyed by Sailor Moon and Sailor Mars, Neflite died of his injuries and dissolved into dust.

In Episode 22, Neflite is referred to at time, and in Episode 39, he is seen in a flashback standing alongside Jedite, Zoycite, and Malachite (Kunzite) in two scenes, one of which involves all four of them being sucked into a crystal. 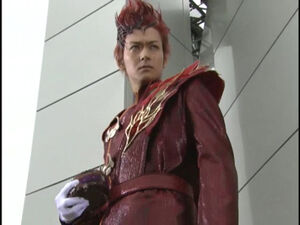 Nephrite as he appeared in the 90s anime.