Mother of the Centipeetles (as corrupted)

Save Steven from being crushed by a stalactite.
Reunite with her crew (both succeeded).

Nephrite (specifically known as Nephrite Facet-413 Cabochon-12) also known as the Centipeetle Mother is a corrupted gem, a member of Pink's court, and former antagonist in Cartoon Network TV series Steven Universe. She is the mother of the host of centipeetle group that raided Steven's bedroom in the Season 1 episode, "Gem Glow". She returned in later episodes after that, like "Monster Buddies" and "Monster Reunion". In the episode "Legs From Here to Homeworld", she is revealed to be Nephrite when she is temporarily uncorrupted by Blue Diamond, Yellow Diamond, and Steven, now conformed as Pink Diamond.

In her corrupted form, Nephrite as the Centipeetle's consists in giant centipede-like monster composed of dark green segments through her body, in each of them she has a pair of brown legs. She also has a kind of mandible on both her head and rear, the head is the gemstone's place which also serves as her iris on the eye, while the rear (as well the head) she uses to attack. Her green Nephrite crystal is located on what appears to be her forehead and behind, she has white hair which is the remaining of her previous self.

In "Monster Buddies", she morphed into a small version of her monster self. The Nephrite crystal on her forehead is missing, the segments through her body along with legs and mandibles in both head and rear have been reduced and her gemstone is now her eye and the center of it has a black iris.

In "Monster Reunion", after Steven used his healing spit on her, she recovered half of her old form. In this form, she got brown humanoid legs and arms, her head took a more humanoid shape with the Nephrite gemstone's location being her eye. However, part of her corrupted form still remains as her mandible and rear are visible out of place. She wears a bodysuit similar to that what Pearl used in "Space Race" and "Back to the Barn" with different palette colors and what appears to be a torn-up light gray clothing.

In "Legs from Here to Homeworld", after being temporarily uncorrupted by the combined efforts of Blue, Yellow, and Steven, Nephrite looks exactly the same. However, she has the edition of having the Pink Diamond insignia on her chest, and a tight black skullcap that holds down the majority of her hair. She also has a light gray tailcoat, and fur framing across her face as well a rounded face and a mouth similar to Amethyst.

Nephrite's personality as a gem isn't clear at all, but she most likely was always loyal to the Diamonds. She also takes care of those whom she considers true allies, as she was truly worried when she was unable to find her teammates, furthermore she protects Steven from a seagull in the beach and later saves him from being killed by a stalactite which clearly proves she really cares about those around her.

While Steven tamed her as a pet, it's shown that she created a special bond with him, even started to eat human food such as a bag of chips. Aside from this, she shows to be playful and protective with him once healed, but is unable to speak his language because of not being fully reformed, therefore she has to make draws to directly communicate with him.

Nephrite in her corrupted Centipeetle form acted wild, obsessed and completely out of control. It seemed like her only goal was to get rid of Steven and the Crystal Gems and possibly anything on her sight and preserve the place for her centipedes. However, it's presumed that Nephrite more likely wanted to get to the warp pad of the Crystal Temple and find her crew.

Nephrite returns in "Monster Buddies", in this episode Steven tames the Nephrite in her smaller Centipeetle form (which it acquired after her bubble was accidentally popped by Steven). Steven interacts with Nephrite until The Crystal Gems arrive. Steven explains he freed Nephrite when he popped her bubble, and asks Garnet if she can let him train it, Garnet and Amethyst agree while Pearl was still worried also agrees. Nephrite starts being friendly towards Steven and even begins to like Potato Chips from Steven. Pearl still thinks it's a bad idea but Garnet decides to give Nephrite an opportunity helping them in the Ice Mountain to tear down the ice walls with her acid spit.

Later on, Nephrite, Steven and The Crystal Gems arrived to the Shooting Star's Room. Garnet summoned her magic gauntlets to hold it because it was too hot to be hold by normal skins. However, Nephrite went crazy when she saw Garnet's gauntlets and spat acid everywhere of the room. Pearl, Amethyst and Garnet fought Nephrite believing that she turned wild again, but Steven stops the fight between them. Steven tries to convince Nephrite that she can be something more than a monster, remembering the good times they had before. Steven hugs Nephrite and she starts to calm down, however a stalactite falls from the ceiling and Nephrite pushes Steven to Garnet. As she risked her own life for Steven, the hit made her retreat to her gemstone.

Steven cries at the lose of Nephrite, but Garnet comforts him that Rose Quartz (Steven's mother) would be so proud of him. Garnet also tells Steven that Rose once tried to heal the corrupted gems but she failed in the process, Pearl also comforts him that he can do even more than her mother could do with them. Motivated for this, Steven learns the ability to bubble gems and bubbles Nephrite's gem as he says "Wait for me Centipeetle, I promise I'll heal you up some day", and transports the gem back to the Temple along with the bag of Potato Chips.

In "Ocean Gem" Nephrite along with other gem monsters are seen in a flashback when Pearl and Amethyst speak about the corrupted gems and how they used to be like them uncorrupted.

Nephrite did not appear in any episode of the second season, but her gem did appear in a form of an animation error in "Keeping it Together'.

In the episode "Monster Reunion", Steven regains his healing powers and convinces the rest of the Crystal Gems to try and help heal Nephrite. Using his power, he manages to get Nephrite to transform into a more humanoid appearance, but she still isn't fully healed. The Gems allow Steven to let Nephrite stay, and afterwards Steven and Nephrite communicate through art. Nephrite then reveals that she was formerly a leader of a crew from Homeworld, and was commanded to go to Earth and colonize it. Unfortunately, this was around the beginning of the Rebellion. Once it had started, Nephrite and her crew fought in the war, but Nephrite had gotten separated from her crew and was on her own. Then Nephrite's commander ordered for Nephrite to retreat, but she was left behind on Earth, where she would be corrupted along all the other Gems left on Earth by a flash of light initiated by The Great Diamond Authority.

Suddenly Nephrite starts to corrupt back again, she begs Steven to guide her to her crew, though Steven didn't understand at first, he and Nephrite warp to the Ancient Colony Ship which was indeed Nephrite's spaceship. She goes into a breakdown while running in the forest as she slowly corrupts back to her monster form. Although she was a centipeetle again, she had enough consciousness to recognize Steven and her crew members once entered the gem colony ship. Once reunited with them (even if they were corrupted), the Crystal Gems arrive on the colony ship, Garnet tells Steven these Nephrite centipeetles are her crew and they waited for her because they didn't want to leave her behind. Steven asks if they can stay in the ship, and the Crystal Gems agreed knowing that it was their home now. As for this episode, Nephrite is now currently living with her crew.

She returns in the episode following the events of "Reunited", "Legs from Here to Homeworld". In the promo, Blue Diamond is confused to see any Gems left on earth as she thought that she, Yellow and White eliminated the all the Gems from earth, but Steven responded that it didn't happen that way. A next scene is Blue, Yellow, Steven and the Crystal Gems at the entrance of the Ancient Gem Colony Ship, then Steven opens the spaceship's door drawing the attention of the Nephrite Centipeetle with a bag of chips. Steven then tells Yellow and Blue Diamond that they have to fix her corruption. Yellow Diamond uses her electric powers to uncorrupt Nephrite's Centipeetle form, however she still acts beastly. Blue Diamond then uses her empathetic powers to further attempt in uncorrupting Nephite. This causes Nephrite to talk and have an emotional breakdown. Steven then uses his healing spit on Nephrite's back, calming her down. She reveals herself to be Nephrite and apologizes to Blue and Yellow Diamond for not commencing with the order to evacuate from a Hessonite. Nephrite then assumes that her diamond Pink Diamond is avenged and that she said that Rose Quartz is shattered. Unfortunately, the three Diamonds are not enough to fully uncorrupt Nephrite, and she turns back to her Centipeetle form and crawls back to the dropship.

In "Change Your Mind" she is healed along with the rest of the Corrupted Gems, and is reunited with her crew, like she did in "Monster Reunion".

Although Nephrite doesn't appear physically in the movie, she is seen in a flashback in her corrupted form along with other antagonists. There are also Nephrites living in Little Homeworld, presumably the same that were part of Nephrite's crew.

Nephrite reappears in the epilogue series Steven Universe: Future. Nephrite along with some members of her crew appear during the opening song along with the rest of the gems. Despite not appearing in the actual series, some of her crew members appeared in most of the episodes. Nephrite's drawing of her and Steven from "Monster Reunion" is also shown still in the fridge in some episodes even the finale. 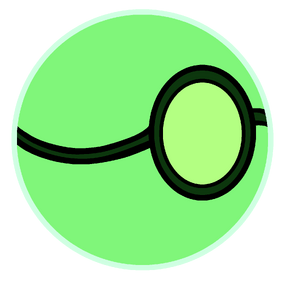 Nephrite's gemstone is located on her eye (as humanoid) and in the Oropharynx (back of the throat) and doubles as the eye (as corrupted). 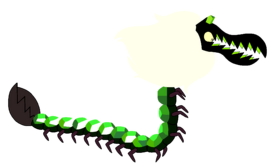 The Corrupted form of Nephrite (the Centipeetle Mother) 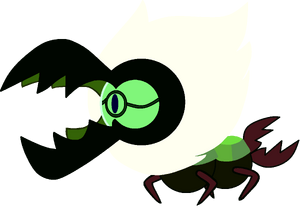 Nephrite after she turned into her small Centipeetle form in Monster Buddies. 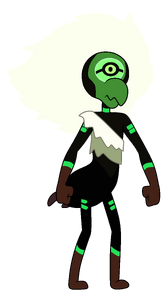 The Semi-Corrupted form of Nephrite after Steven attempted to heal her.

Nephrite's true form after being partially healed by Steven and the Diamonds.

Nephrite transformation after being released from bubble by Steven. 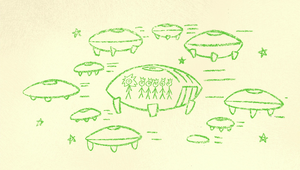 Nephrite and her crew before corruption traveling to earth. 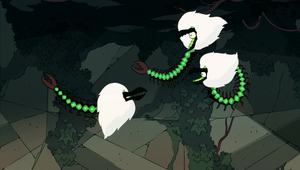 Nephrite with her remaining crew in "Monster Reunion". 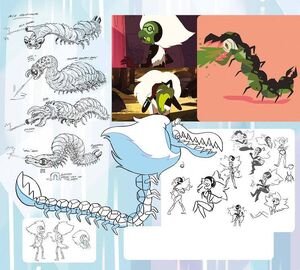 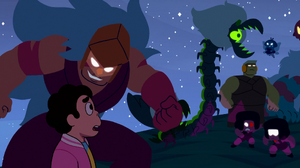 Nephrite as the Centipeelte Mother seen in a flashback in Steven Universe: The Movie. 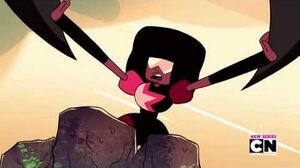 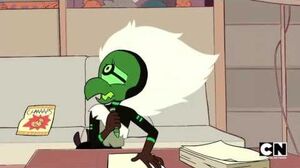 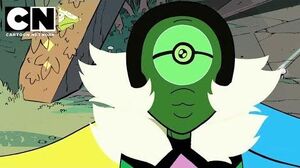