Neptuna is one of the secondary antagonists of Plants vs. Zombies Heroes. She is a zombie mermaid who leads Hearty and Sneaky classes.

Not much is known about Neptuna's past, and who is her zombie fighter counterpart.

In Neptuna's introduction comic strips, she can be seen launching a giant Octo-pult at Crazy Dave after he makes fun of her.

Neptuna appeared in Attack of the Tentacles while preparing to attack Solar Flare, Chompzilla, and Grass Knuckles playing volleyball at the beach. She then summoned her octopi to attack them, until the Plant Heroes used the volleyball net to tie her and her pets up.

In Menace on Molten Mountain, she, alongside Super Brainz, Immorticia, and Impfinity planned to battle Captain Combustible, who used his power to boost the Peashooters. They had a fight until Super Brainz used her tank to extinguish the Plant Hero's torch.

After the Hollow Earth was discovered in Colossal Fossils, Neptuna did not leave paradise lost, but instead used her powers to flood the Hollow Earth, and attacked plants with a vast army of Zombie explorers, pirates, and barbers. Her goal is to align all Mustache Monument to become unstoppable.

Neptuna is a mermaid that can launch a wave of octopi thanks to her trident. She also shares the weakness as a standard mermaid, as she cannot move without water. 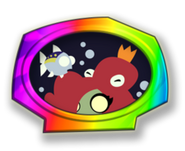 Retrieved from "https://villains.fandom.com/wiki/Neptuna?oldid=4145311"
Community content is available under CC-BY-SA unless otherwise noted.