Neptunemon is an antagonist and the second villain in the both the anime version and the manga version of Digimon Fusion.

Neptunemon is a Mega Class Digimon that resembles the mythological character Neptune.

Neptunemon first appeared when an injured Gizamon told him the news that the Digidestined appeared. He and his Mantaraymon army set off to search for the intruders. Neptunemon kidnapped Archleomon and forced him to tell him where the Code Crown is. Neptunemon then summoned an army of Seadramon to take care of the Digidestined.

When the water became ice, Neptunemon and the Fusion Fighters came face-to-face and rescued Archleomon. When Shoutmon, Ballistamon, Dorulumon, and Starmons became Shoutmon X4, Neptunemon fought and attacked with his Vortex Penetrate, which the spear has a mind of its own. Shoutmon X4 tricked Neptunemon by luring his own spear at him and got killed by Shoutmon X4 using his own weapon against him.

With his dying breath, Neptunemon used his Wave of Depth to wipe out the Digidestined (before being rescued by KingWhamon), and after that he was destroyed. When the Fusion Fighters obtain the last unclaimed Code Crown fragment, Neptunemon is revived and purified.

Neptunemon was one of the generals of the Bagra Army. The Twilight army manage to obliterated Neptunemon, as well as his troops. Alls left are the remains of Neptunemon, and his army of his Mantaraymon fleet, his Octomon, and his Divermon soldiers' dead bodies. 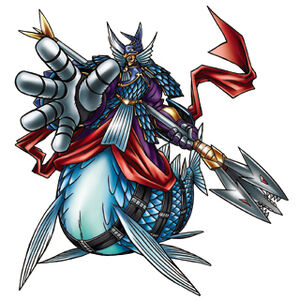 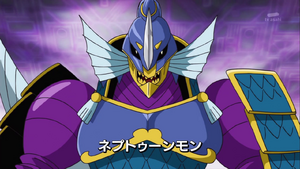