An elder shaman, Ner'zhul was the manipulative chieftain of the Shadowmoon clan of orcs and the first official Warchief of the Orcish Horde and of the Horde of Draenor. He was tricked into making a Blood Pact with Kil'jaeden the Deceiver; one that bound the orcs into the service of the Burning Legion. Following the Second War, he opened several portals on Draenor in an attempt to seek out new lands to escape to and conquer, but was immediately captured by Kil'jaeden. His mortal form was destroyed and his spirit was transformed into the spectral Lich King, which was then encased in the mystical ice of the Frozen Throne atop the Icecrown Glacier in Northrend.

When Illidan Stormrage attempted to melt Icecrown Glacier, much of Ner'zhul's power was weakened. Ner'zhul called his champion, Arthas Menethil, back to Northrend to defend the glacier from the forces of the Legion. Arthas and Anub'arak made their way to the glacier where they did battle with Illidan's army.  As the Lich King, Ner'zhul would rule the Scourge alone until his merger with Arthas Menethil, who largely consumed his spirit to rule as the Lich King alone. Vestiges or at least memories of Ner'zhul remained in the new Lich King, who once referred to himself as a former shaman.

In Warlords of Draenor, the heroes of Azeroth encounter an alternate reality Ner'zhul who has joined with Grommash Hellscream in the Iron Horde. Here, Ner'zhul was forced into joining the Iron Horde under threat of the complete annihilation of the Shadowmoon Clan. Out of fear of this fate, Ner'zhul sought to enslave the notorious Dark Star of Shadowmoon legend. The Dark Star, however, turned out to be a corrupted Naaru, which the Prophet Velen cleansed by sacrificing himself. Now without his secret weapon, Ner'zhul fled the Iron Horde and into his hidden burial grounds where he further practiced his dark magics. He remained there until his death at the hands of invading adventurers. 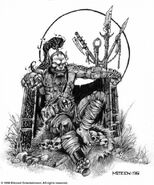