Torment John Constantine and his allies

Wrathful Demon
Nergal is a major recurring antagonist in the DC comic series Hellblazer. He first appeared in Hellblazer #8.

He pushed John to try his first cigarette and ended up without the packet as John stole it.

Nergal led a group called the Damnation Army, made up of human agents, who fought against an Evangelist group called the Resurrection Crusade. A girlfriend of John Constantine, named Zed, was caught the in the middle of these two groups, intending to fulfill a prophecy - to give bith to either the Anti-Christ or the Second Coming. When Constantine is badly hurt, he makes a deal with Nergal. Infusing him with demon blood, Constantine is healed. He later makes contact with Zed and eventually makes love to her. By being together Zed is exposed to Constantine's tainted blood, making her uselss for the prophecy.

Constantine was haunted by a horrible event, taking place in Newcastle where he participated in an exorcism of a little girl. It went horribly wrong with many people being killed. Constantine eventually found out that Nergal was in fact the same demon from Newcastle. He eventually fought Nergal and gained revenge. Nergal has possessed Chas Chandler before, to help John Constantine against Saul, Maria, and Adam Constantine, John's children by Rosacarnis, making them Nergal's grandchildren. He was in the form of a rat when he possessed Chas Chandler, and when he left Chas Chandler.

Recently Nergal has tried to stop Constantine's wedding to Epiphany Greaves, realizing that this might make Constantine happy, and he, along with the rest of Hell, takes a lot of pleasure in Constantine's pain and misery. He bribed a succubus, Gloria, to try and seduce Constantine. He had previously banished Gloria from Hell, and offered for her to come back if she did this. When she didn't succeed, and refused to try again Nergal killed her, saying "she had too much heart". 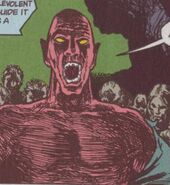 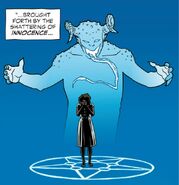 Nergal in Constantine: City Of Demons: The Movie.