Creator of the morphs
De-facto leader of the Black Fang

The power to steal quintessence

Nergal is the main antagonist of Fire Emblem: The Blazing Blade. An ancient and powerful sorcerer, Nergal once desired the power to open The Dragon's Gate and reunite with his shattered family. However, the dark magic Nergal wielded erased his memories, warping his motivation to wanting power for it's own sake.

Nergal is an elderly man with a narrow face, long pointed nose, and light blue hair with an identically colored beard. Nergal wears a purple turban that covers the right side of his face, which was heavily scarred by his former friend Athos. Nergal wears a matching purple cloak over dark purple robes with gold trim.

Nergal was once an adoring family man who loved his wife and children. However, Aenir's kidnapping drove him to seek power to save her, and later reunite with their half-dragon offspring Ninian and Nils. Unfortunately the dark arts Nergal studied corrupt their wielder's memory over time, and over his thousand years of existence he completely forgot about his family. Similarly, Nergal originally made morphs because he was fascinated with creating life, but as his mind decayed he viewed them as mere tools to secure power for himself.

During what would be known as the Scouring, Nergal met and fell in love with a Manakete named Aenir. Together, they had two children named Ninian and Nils. Sometime later, Aenir was abducted by an unknown group. Wanting to protect his children, Nergal left them on the island of Valor, where the Dragonkin constructed The Dragon's Gate to flee Elibe as humanity won The Scouring. Before leaving Ninian and Nils to look for Aenir, he instructed them to enter the Gate if he did not return in ten days. Despite searching extensively for Aenir over those ten days, he was never able to find her. Furthermore, the Dragon's Gate could only be operated in Elibe by Dragonkin, so Nergal was unable to rejoin Ninian and Nils. Desperately wishing to see them again, he began studying dark magic, hoping that it would help him reopen the Gate.

Unfortunately, dark magic is as corrosive as it is powerful, and over five-hundred years of existence, Nergal forgot his family while retaining his desire for power and to open the Dragon's Gate. While wandering the Nabata Desert, he met Athos, one of the Eight Legends who led mankind during The Scouring. Due to their shared interest in knowledge and their desire to uncover the world's secrets, the two became fast friends. Shortly after, the two came across a village co-inhabited by humans and dragons who desired peace. Intrigued by what they saw, the two conjured an oasis for the village's inhabitants. Grateful for the water, they welcomed Nergal and Athos into the village, which would come to be called Arcadia.

Both Nergal and Athos were allowed access to Arcadia's libraries, which contained the vast knowledge of Dragonkin. While studying, Nergal came upon magic that could convert the life force of beings, called quintessence, into raw power. At first, he experimented on small creatures but, as he grew more confident in his abilities, Nergal starting drawing on the quintessence of complex animals, using a human as a test subject. As draining quintessence from an organism kills it, Athos and the village elders pleaded with him to stop. Unable to reason with him, Athos fought Nergal, disfiguring his face, and banished him from Arcadia. Nergal went into hiding in the kingdom of Bern, where he began creating humanoid morphs.

Deprived of Arcadia's libraries, Nergal also sought out alternate sources of dragon knowledge, and eventually came across a family of powerful magic users in Lycia with such information. With the help of his morph Sonia, Nergal learned everything the family knew about dragons and killed all but one member once they were no longer useful. He gave Sonia the sole survivor, an infant named girl named Nino, to raise as a potent mage. However, Sonia proved to be a terrible parent who failed to even teach Nino to read properly. In the meantime, Nergal recognized the potential of Bern's assassin's guild, the Black Fang, in furthering his goals. Sonia proved to be more successful as a seductress than a mother, and her marriage to the Fang's founder Brendan Reed gave Nergal de-facto leadership over the guild. It also gave Nino far more supportive family members in Brendan and his sons Lloyd and Linus Reed. The Black Fang would also welcome Jaffar, a boy Nergal personally groomed to be a killer, into its ranks.

Return to The Dragon's Gate

Eventually Nergal resumed working towards opening The Dragon's Gate, his motivation degraded into harvesting the Quintessence of the dragons who travel through it. Gathering several Black Fang members in the ruins surrounding The Gate, Nergal simply called out for dragons. Recognizing his voice, Ninan and Nils returned to Elibe, but were greatly harmed by the lingering effects of the Ending Winter that concluded The Scouring. To survive, they assumed their Manakete forms and sealed their draconic powers inside a dragonstone, but Nergal instantly stole it for future experimentation. He also imprisoned the two for their ability to open The Gate, but they escaped and for a time successfully evaded the Black Fang with the help of Lyn. Unfortunately, Nergal was able to find and re-imprison the two.

While searching for Ninian and Niles, the Black Fang also sowed discord in Lycia so that Nergal could collect quintessence from the ensuing rebellion. For this purpose, Nergal attracted the attention of Lycian nobles Darin and Helman. Helman ended up regretting his decision and was slain for attempting to leave the Lycian Rebellion, but Darin, obsessed with world domination, became steadfastly loyal to Nergal. A third nobleman who became aware of Nergal's plotting was Elbert of Pherae. For his vehement opposition of the Lycian Rebellion and possession of particularly potent quintessence, Elbert and his knights were imprisoned and taken to Valor by the morph Ephidel. It was Elbert's disappearance is that led his son Eliwood to actively oppose the Rebellion, joining forces with Lyn in the process. While Eliwood found Elbert and slew Darin at The Dragon's Gate, he was unable to stop Nergal from brainwashing Ninian or draining Elbert of his quintessence. Ninian began to open the Gate and call a single dragon through it, but Nils snapped Ninian out of her brainwashing, abruptly closing the Gate and killing the Dragon and Ephidel in the resulting explosion. During the confusion of the failed dragon summoning, a dying Elbert used the last of his strength to greatly wound Nergal, forcing him to flee.

A grieving Eliwood returned his father's body to Lycia, and Nergal returned to his base of operations. Between Darin's death and the strong quintessence derived from Elbert's knights, Nergal gave up the Lycian rebellion. Instead, Nergal turned towards King Desmond of Bern, who was intensely resentful towards his sonZephiel. Eager to use Bern's might to harvest more quintessence, Nergal negotiated with Desmond to assassinate Zephiel. However, the Black Fang's assassination mission was thwarted by Eliwood, costing Nergal Bern's favor. With dwindling options, but also having recovered from Elbert's injuries, Nergal gathered what was left of the Black Fang and confronted Eliwood's party at the Shrine of Seals, where Athos was bestowing them the eight legendary weapons specifically to kill him once and for all. Though the Black Fang died in the ensuing confrontation, Nergal successfully abducted Ninian and demanded that she once again open the Gate. After refusing, Ninian assumed her dragon form and fled yet again; Nergal closely followed her and witnessed her death at the hands of Eliwood just after he obtained the dragon-slaying sword Durandal. After taunting a shocked Eliwood over his accidental murder, he gathered Ninian's quintessence and attempted to take Nils as a replacement dragon. Athos thwarted this kidnapping with Forblaze, but though Nils was saved Nergal was barely scratched by the spell.

At the Dragon's Gate Nergal combined Ninian's quintessence with her and Nil's dragonstone, satisfied that he had a tool to summon a hoard of dragons. Nergal began his final preparations, but was interrupted by the morph Limstella, who noted that the quintessence from the fallen Black Fang was depleted. Nergal was confident that their next source would arrive on Valor shortly. Sure enough, Eliwood's party reached the island, and Nergal tasked Limstella with leading an army of morphs to gather their quintessence. He also granted her great power at the cost of her body's constitution. Limstella failed to stop Eliwood's army from reaching Nergal inside the ruins and, Eliwood took him to task for his power mongering. Rage building inside of him, Nergal claimed that mourning others was a sign of weakness in the world where gaining power and becoming a greater being is the ultimate goal. Turning to Athos, Nergal pointed at the wound Athos inflicted on him back in Arcadia, citing it as proof that valuing in others only leads to weakness and betrayal. Despite being accompanied by several powerful morphs, Nergal is overwhelmed by Eliwood's forces in the ensuing fight. As he lay dying, Nergal has a moment of clarity and asks himself why he wanted power, before using the last of his strength to call dragons through the Gate so that they could wreak havoc against humanity.

Nergal's portrait when fighting Eliwood's forces at the Dragon's Gate. 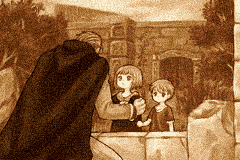 A young Nergal, Ninian, and Nils. 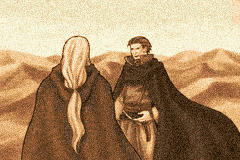 Nergal and Athos meeting in the Nabata desert. 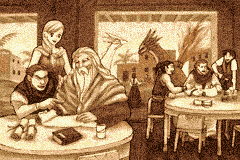 Nergal and Athos studying in Arcadia. 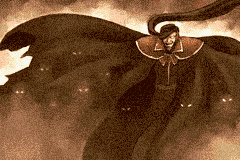 Nergal and his morphs. 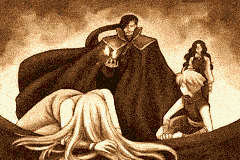 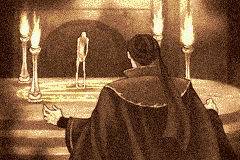 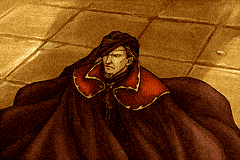 Nergal in a dragon's shadow. 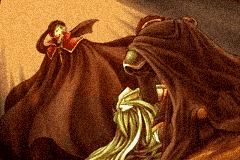 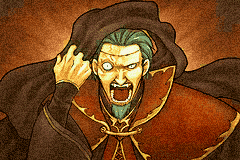 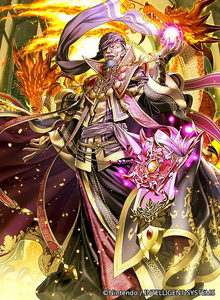 Artwork of a Fire Emblem 0 trading card of Nergal.