Nero was the lower ranking intern of CP9 and an antagonist in One Piece. He was first introduced on the Puffing Tom, where he was helping to escort Nico Robin to Enies Lobby.

He is voiced by Hidenobu Kiuchi in Japanese, and Todd Haberkorn in English.

As Nero was a new candidate, he only could use four of the six Rokushiki techniques: Soru, Geppo, Kami-e, and Rankyaku. His lack of Tekkai and Shigan made him unable to block powerful strikes and pierce opponents, respectively. To compensate, he evaded enemy strikes carefully with Soru, Geppo, and Kami-e; for offensive, along with slashing with Rankyaku, he used a pair of pistols instead of stabbing with his fingers. He was at least skillful enough to have one variation of Rankyaku.

Nero may not be very strong compared to the other, fully-trained CP9 agents, but he was still quite intelligent, since he figured out that the attackers on the Puffing Tom would try going along the roofs of the train cars in order to reach the one containing Nico Robin as easily as possible, and he was able to quickly deduce that Franky was vulnerable to attacks aimed at his back. Alas, this was not enough to impress his assessor, Rob Lucci.

Regardless to his creative improvising and analytical nature, his lack of mastery of Rokushiki caused Rob Lucci to claim Nero was "worthless" to the unit, leading to Nero's rather brutal dismissal.

Nero attempted to stop Franky from rescuing Robin but failed and was punched through the roof of Puffing Tom, into the cart where the rest of CP9 was. Battered as he was, Nero continued to try to fight Franky and stated he would kill him, but Lucci would not allow this, as they were simply supposed to capture him. Displeased that Nero failed in his task, Lucci gave Nero three seconds to escape, who was too slow to grasp the notion that he just got fired. At which point Lucci quickly took him out with five Shigan attacks. Lucci then personally expelled him from CP9 and Nero's wounded body was thrown into the ocean during Aqua Laguna, one of the biggest storms in the world. It is unknown whether or not Nero is dead or alive. 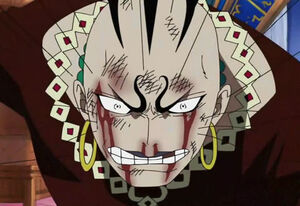 Retrieved from "https://villains.fandom.com/wiki/Nero_(One_Piece)?oldid=4322865"
Community content is available under CC-BY-SA unless otherwise noted.