Nero (The Trials of Apollo)

The Trials of Apollo

Have Colossus Neronis destroy Camp Half-Blood and make it his new front lawn.

Destroy the Oracles.
Kill Apollo.
Rule the world as a God.
Have Meg McCaffrey join him again.
Set Manhattan on fire (all failed).

Nero, also known as The Beast, is is one of the main antagonists of Rick Riordan's Greek mythology book series The Trials of Apollo, which is a sequel series to Riordan's other two series Percy Jackson and the Olympians, and The Heroes of Olympus.

He is a descendant of Apollo (the Greek God of the Sun), the nephew of Caligula, the stepfather of Meg McCaffrey (a demigod daughter of Demeter, Greek Goddess of Agriculture), a member of Triumvirate Holdings (alongside Caligula and Commodus).

He is based on the real life emperor Nero.

Nero was born in in 37 AD, the last of the dynasty of Julius Caesar. He was responsible for the fire of Rome and only acted when the flames threatened his manor. He was married three times and became a widower as many times. He burned Christians alive at his parties. When he was thirty he became a god-emperor.

Nero has influenced many events in history via Triumvirate Holdings, also using the company to supply funding to both Luke Castellan (during Percy Jackson and the Olympians) and Octavian (during The Heroes of Olympus).

At an unknown point in time, Nero killed Meg McCaffrey's father Philip, and proceeded to take in and raise her as his own daughter. Through his sophisticated manipulation over the years, Nero lead her to believe that he and "The Beast" (which he claimed killed Meg's father) were two separate people and made her unquestionably loyal to him.

The Trials of Apollo

Nero first appeared talking to Python in Delphi. After Meg and Apollo (who was trapped in a mortal form as punishment by Zeus) found the antechamber to the Grove of Dodona, they finally see that he is trying to burn down the grove. While Apollo tries to save the grove and his restrained demigod children Kayla and Austin, Nero orders his Colossus Neronis to attack the camp, while fleeing himself, along with Meg and her Karpoi (grain spirit) servant Peaches.

Nero is seen in Apollo's dream ordering Meg to capture Apollo. He has a Germanus guard and a man named Marcus go with Meg to make sure nothing happens. However, Meg escapes them and returns to Apollo. He also appears in a flashback with a six year old Meg looking at the dead body of her father on the steps of Grand Central Station. It is also said that he took away Peaches, claiming that Meg did not deserve a "pet" and gave him to his fellow Triumvate Holdings member Commodus, how attempted to kill Peaches, but was stopped by Apollo and Meg.

The Tower of Nero

Nero sent Luguselwa and the Germani to hunt down Apollo and Meg. After Lu helped them escape, Nero ordered them tp surrender, otherwise he would destroy all of New York with Greek Fire. After Apollo and Meg arrived, Nero revealed that he knew Lu had betrayed him, and ordered his eight-year-old foster son, Cassius, to cut off her hands.

Nero tried to brainwash Meg again. After Camp half-blood and the troglodytes disabled the Greek Fire, he threatened to unleash Sassanid Gas on the campers. When Apollo confronted him, he ordered Meg to kill him, but she refused. He then ordered his foster children and Dryad slaves to battle Apollo and Meg. They managed to stop the gas, and Apollo killed Nero. However, Nero's godly power was transferred to Python. 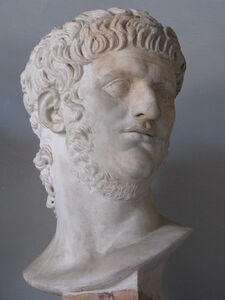