The River Guardian (by Hades)

"The Pinhead with Hooves" (by Megara)

To have his way with Megara (failed).

Nessus is a minor antagonist from Disney's 35th full-length animated feature film film Hercules. He is a powerful, dangerous, aggressive, yet fairly dimwitted centaur, who is known as the River Guardian. He is based on the mythical being of the same name.

He was voiced by Jim Cummings, who voiced another Disney villain Pete.

Nessus makes his debut where Megara tries to get him to join Hades' army, but Nessus thinks Meg is very beautiful and tries to kidnap her. Hercules arrives and sees Nessus attacking Meg and beats him up, making Hades see that he is useless to his army. Nessus is not seen again for the remainder of the film.

Nessus is head-butted into a waterfall, rode like a horse, slammed into a tree and finally super-punched into the air only to be comically knocked unconscious by his own horse shoes. His tough guy persona being shattered added to the comical response of the audience, offering an extremely uproarious and hilarious moment in which Nessus's last horse shoe creates a "ringer" around the lump on his head. Pegasus adds to the comical affair by adding a last puff of air that topples over Nessus, then performing a jig on him as he floats atop the water.

In the popular Disney game released after the film, Nessus has his own level called "The Centaur's Forest". After advancing through the stage, Hercules come once again face to face with the dimwitted Nessus. The game follows a similar series of events taken from the film. The player must jump onto Nessus's back riding him to do damage. After a series of these Nessus will remain dizzy. A super punch can be given to the big guy sending him flying into the air followed by his shoes. The player then is treated to the same sequence as in the movie with Nessus's shoes knocking him out in front of Meg.

Nessus is overall a brutal creature. He only knows to use violence when he's angry. Also, he also has a seductive side, as seen with Megara. He's all the more insisting as the young lady refuses to love him. Loving Megara "in rage", he's only more amused faced with his refusal. 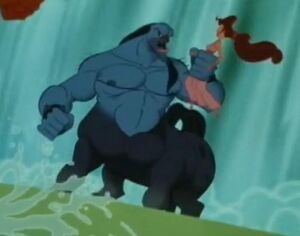 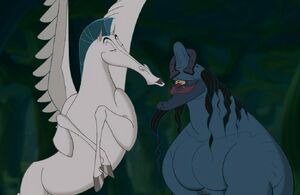 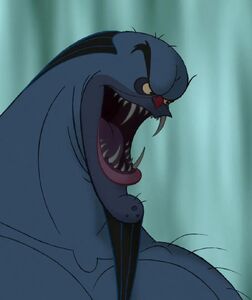 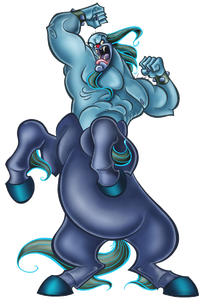 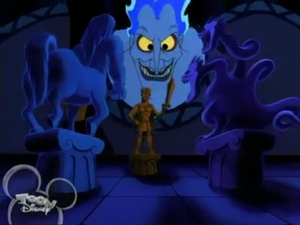 Retrieved from "https://villains.fandom.com/wiki/Nessus_(Disney)?oldid=3831196"
Community content is available under CC-BY-SA unless otherwise noted.