Master
Your Goldness
Partner
The Monster

Finding the Rim of Heaven

Nettlebrand, also known as "The Golden One", is the main antagonist in the children's novel Dragon Rider, written by Cornelia Funke. He is voiced by Patrick Stewart in the German animated movie based on the novel. Patrick also played King Goobot in Jimmy Neutron: Boy Genius, John Bosley in Charlie’s Angels, Pharaoh Seti I in The Prince of Egypt, Darcy Banker in Green Room, King Buffo in Courage the Cowardly Dog, Rafe Bentley in Masterminds, Avery Bullock in American Dad!, Dr. Jonas in Conspiracy Theory, and King Claudius in Hamlet.

Nettlebrand is a big golden dragon. He is unable to fly because he has heavy armor on. He has two horns and ears on his head. His scales are very thick and can be melted by a brownie's spit. He has a spiny tail.

Created by an alchemist in the medieval times, he was meant to hunt down dragons for their horns. The alchemist wanted dragon horns to make gold. He made Nettlebrand have the power to communicate and to travel through water. Nettlebrand's armour is invincible to dragon fire. Nettlebrand ate his alchemist and Twigleg’s 11 homunculus brothers. However, Twigleg was spared as he needed someone to polish his armor. Unfortunately for Nettlebrand, the armor polish was replaced with brownie spit. Nettlebrand enters the cave, and is at once dive-bombed by Firedrake, Maia, and Lola in her plane. The dragons come together and set Nettlebrand afire. The brownie spit reacts at once, dissolving Nettlebrand's armor and weakening him. He melts to reveal nothing but a toad underneath.

Created by the evil alchemist Petrocius, Nettlebrand turned on his own creator and devoured him before going after the dragons who could do nothing against him due to Nettlebrand's fireproof armor. After a long hunt around the world, the monster lost track of his prey and returned to his creator's castle, remaining obsessed with his desire to devour. In the meantime, he obtained Twigleg as a slave, also devouring his siblings.

Five hundred years later, a dying Nettlebrand orders Twigleg to entertain him so the homunculus shows his master a website to meet the perfect Match. After giving a rather viscous description of himself, like his pleasure in devouring dragons, Nettlebrand is interrupted by Gravelbeard who warns him of Firedrake's presence nearby. Excited at the idea of ​​devouring a silver dragon, the monster comes out of its lair to try to catch his new target but by the time he arrives, Firedrake, Sorrel and Ben have already spun through the air. He then sends Twigleg to their kit on the back of a crow, keeping in touch by phone. With the monster no longer having a slave, Gravelbeard proposes himself due to his reckless admiration for the metal creature, which Nettlebrand does not greatly delight since the dwarf easily infuriates him.

Only one day has passed, Nettlebrand continues to wait in his castle while enduring the chatter of Gravelbeard who dares to say that the monster has a sensitive side when he sees the dating site on his computer. He then waltzes the dwarf when he starts singing before receiving a call from Twigleg who informs him that the trio are heading to Rim of Heaven, much to his excitement. Upon learning that they are going to see a Ten Thousand Year Old Djinn, Nettlebrand tells Twigleg to continue following the trio as the Mighty Djinn is known to destroy those who come to see him, thus possibly destroying his chance to reach the Rim of Heaven. Knowing where the Mighty Djinn lives, Nettlebrand embarks on the submarine made by his creator with a clandestine Gravelbeard.

A few days later, Nettlebrand suddenly appears and attacks the Djinn as he was about to vaporize Firedrake. The two giants trade blows, with Nettlebrand having the upper hand in large part because the Djinn's eye ray does nothing to him. After beating the Djinn and once again missing the trio, Nettlebrand becomes exasperated from hearing Gravelbeard's incessant chatter until he crushes him under his tails, relieving him.

Continuing his hunt, Nettlebrand contacts a Twigleg recently discovered by the trio who tries to hide this from his master by claiming the Rim of Heaven is at the North Pole. The clumsiness of Mad Doc reveals the scam, to the anger of the monster who promises Twigleg that he will pay for his betrayal. Landing on the beach, Nettlebrand angrily emerges from his submarine and sends another crow that steals the map leading to a distant mountain named the Great Peak, a place where Ben thinks he has located the Rim of Heaven.

After another aquatic journey, the submarine pierces the ice and the monster comes out, still devilishly determined upon seeing the mountain. As the gang enters an Ice Cave, Sorrel spots Nettlebrand who quickly begins chasing them until he ends up under a landslide. Exited in time, the gang catch their breath seconds before Nettlebrand literally smashes the walls of ice separating him from the outside in an attempt to grab them but Firedrake dodges fast enough that Nettlebrand misses them, dragging the monster and the dwarf in. a fall to the bottom of the mist.

Still undefeated, Nettlebrand furiously extricated himself from the snow, a rusty part of his armor ripped off and revealing his golden body. He continues his hunt, nearly flushing out Ben and Twileg separated from Firedrake and Sorrel by their scent before Gravelbeard points out Ben's footsteps climbing to the top.

Entering the temple with his long impatience to devour the silver dragon, Nettlebrand removes all of his bodily rust before a finished fleeing Firedrake bravely confronts him. The young dragon attacks only so that Nettlebrand does not easily push him back with a single swipe of his tail. Unable to compete with the monster's strength, Firedrake dodges as much as he can but Nettlebrand grabs him and slams him to the ground. Sorrel then tries to come to his friend's aid just so Nettlebrand doesn't flick her before grabbing Ben in the grappling hook of his tail. Twileg in turn tries to do something by distracting his former master with a fake tweet, unfortunately his phone's battery is suddenly drained. Nettlebrand throws down his phone and is a step away from devouring Ben as an appetizer while wanting Firedrake to watch him do it but encouraged by the human, Firedrake manages to make a blue fire more powerful than a normal fire, capable of damaging the beast. of metal. Consumed by flames against which his armor is powerless, Nettlebrand howls in agony as he is completely melted into liquid gold, ending his threat once and for all. 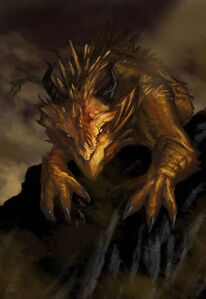 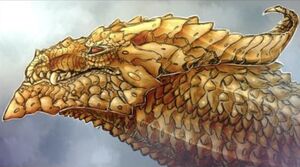 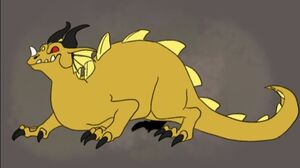 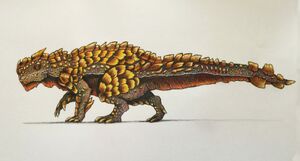 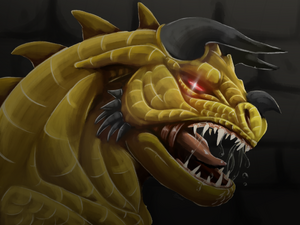 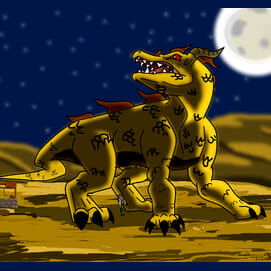 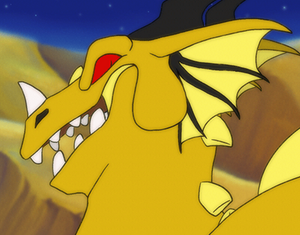 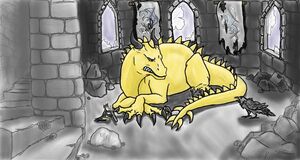 Nettlebrand after knocking Mighty Djinn to the ground.

Nettlebrand's death.
Add a photo to this gallery

Retrieved from "https://villains.fandom.com/wiki/Nettlebrand?oldid=4282899"
Community content is available under CC-BY-SA unless otherwise noted.