One of the Guardians of the Temen-ni-gru

Nevan, also known as Nevan the Lightning Witch, is a minor villain in the video game Devil May Cry 3: Dante's Awakening. She is one of the demon gatekeepers of the Temen-ni-gru that Dante encounters.

She was voiced by Mary Elizabeth McGlynn, who also played Echidna in Devil May Cry 4, and Maria in Silent Hill 2.

Nevan is gray-skinned vampire witch with long red hair. Her hair is used to cover her bust. Navan wears a dress-like cloak that's made entirely out of bats, in which she can use them as a shield or projectiles. The cloak only covers her lower half.

Dante meets Nevan on his path down to the Lair of Judgement. When he enters the Sunken Opera House, Nevan appears in front of Dante. She tries to lower Dante's guard by flirting with him. When that didn't work, the two begin to fight. She fight with lightning, bats, a dark wave that comes out of her cloak, and a kiss that can drain all of Dante's life. After Dante defeats her, Nevan tries to bite Dante's neck. But with a gunshot to the stomach, Nevan surrendered. Nevan then decides to relinquishes her soul to Dante as a Devil Arm that's shaped like a demonic electric guitar with a scythe hidden in the guitar.

Before she became a Devil Arm, Nevan stated that Dante was just as handsome as his father, indicating that she both knew and had a bit of a crush on Sparda. 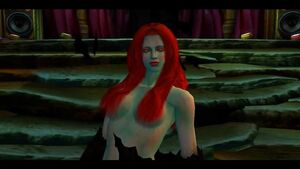 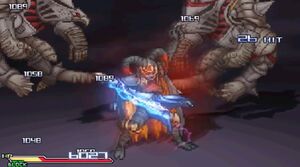