Plunder and pillage the seven seas (both failed).

The Neverland Pirates are Captain James Hook's pirate henchmen and the supporting antagonists from Disney's 14th animated feature film Peter Pan, and its 2002 sequel Return to Never Land. They also appeared in Mickey's House of Villains, and the only two pirates named Sharky and Bones in the all-new Disney Junior's 2011 television series Jake and the Never Land Pirates. However, a band of pirates also appeared as the secondary antagonists in the 2014 film The Pirate Fairy.

The pirates are first seen in the film on their pirate ship in Neverland, singing the song A Pirate's Life For Me. Although they served under Captain James Hook forever, it is implied that they hate him because they spent their time in the aforementioned song throwing swords at a crudely drawn picture labeled "Captain" that was drawn on the cabin door. When the first mate and bo'sun by the name of Mr. Smee comes out of the cabin, he wishes the crew a good morning, but the one of the crew grabs him by the shirt and tell him that there is nothing good about the morning because they are stuck on the island of Neverland and not pirating. Wishing to give up the quest for Peter Pan, they give Smee the orders to tell their boss about their plan to put into sea again.

Later on, when Peter Pan returns to Neverland with Wendy, John, and Michael in tow, one of the pirates spots them and Hook orders the crew to shoot the cannons at Peter Pan and the children. The pirates try to shoot at Peter and the children. Luckily, Peter and the children manage to escape. Later on, after Hook has an encounter with Peter Pan, he manages to capture Pan's fairy friend Tinker Bell and tricks her into telling where Peter's hideout is which is Hangman's Tree and then he locks her up in a lantern and takes the Pirate Crew with him to Hangman's Tree with a bomb rapped as a present for Peter from Wendy. When Hook, Smee, and the Pirates arrive at Hangman's Tree they hear Wendy singing the song about mothers. Here, the crew members and Smee are shown to be visibly sad, implying that they lost their mothers at an early age and it drove them to become pirates. When Wendy, John, Michael, and the Lost Boys come out of the Tree to return home to London, they are captured by the pirates, who takes them back to the ship while Hook and Smee stay behind to put the bomb inside for Peter.

On the ship, they sing about join to be the pirate crews or walk the plank and Wendy told Hook that they never join them. The crew took Wendy to the plank and the boys tied up and Wendy walk to the end of the plank and fell down to the sea. Hook listened to hear the splash, but when it didn't splash, the pirates look down to the sea and saw not so much as a Ripple. Unknown to them, Peter saved Wendy just in time. Still mad at his men for being scared because the ship's bewitchment, Hook threw one of his men (Starkey) into the sea. Hook heard Peter is still alive, then Peter and Hook starts the sword fight. Peter released John, Micheal, and the Lost Boys to join the battle. Hook orders his henchmen to get the boys. John told the Lost Boys to hold their fire the crew with their weapons, but the pirates are ready to climb to the pirate net to battle the boys. Tinker Bell told Peter that the boys are in trouble. Peter flies to the net and uses his dragger to cut the rope, causing all the members of the crew to fall down to the row boat, where Mr. Smee is in it and headed to the sea. Smee and the Pirates crew were rowing the boat away from Neverland until Captain Hook was swimming away by his nemesis by the name of Tick Tock the Crocodile.

In Return to Never Land, the pirates still listen to Captain Hook and actually come with him to London to kidnap Wendy. However, they accidentally kidnap Jane (perhaps because they were unaware of the change of time, since time has virtually stopped in Neverland). They follow Hook's orders to the letter, as they join him in searching for Peter Pan and the Lost Boys. They also join him in the second acquisition of his treasure chest and the fight against Jane and the Lost Boys. Near the end of the movie, they (along with Hook and Mr. Smee) are chased away by the Octopus (who imagines them all to be different kinds of fish). It is unknown what happened to all of the pirate members.

The pirates appear in cameo with Captain Hook and Mr. Smee. They were singing It's Our House Now with the Disney villains in Mickey's House of Villains. They are last seen watching the final showdown between Mickey Mouse and Jafar. When Jafar is defeated, they flee out of the House with the rest of the villains.

Jake and the Never Land Pirates

Neverland Pirates are in Once Upon a time show when they follow Captain Hook's rules.

The pirates commonly appear alongside Hook and Smee in several video games, usually based off the film. They appear in games such as Peter Pan: The Legend of Never Land, Return to Never Land (video game), and Peter Pan: Adventures in Never Land.

In Kingdom Hearts: Birth by Sleep, Smee is on the boat in Ventus' story of the game and he calls out to the crew to fire cannonballs at Ventus and Peter. The part of Hook's crew in Kingdom Hearts is played by numerous Heartless instead of the original characters, presumably having been disposed of once Hook joined Maleficent's alliance.

Their Wasteland counterparts once lived in Tortooga until Hook was forcibly converted into a Beetleworx at Skull Island and many of them were captured and converted as well. Smee and a few others, including Damien Salt and Scurvy Pat, escaped to Venture Land and have been trying to settle in there.

The pirates are seen during the Peter Pan's Flight mini-game. They are first seen holding Cubby hostage in an attempt to learn the whereabouts of Peter Pan. When Pan and the player arrive however, Hook orders the crew to attack. They do so by blasting canons at both Peter and the player. By reflecting the cannonballs, the player if able to defeat the crew and go after Hook.

All members of the Jolly Roger can be seen as audio animatronic. First they are seen ready to kill Wendy and the boys and are later seen beaten down after Peter arrives.

In the original Disneyland version, the crew take part in a Peter Pan inspired scene where they battle Peter until being foiled yet again.

The two pirates appear in the Peter Pan unit fighting with Pan while Hook and Smee watch from close behind.

Dream Along with Mickey

The crew are casts as dancers in the show and are not working for Hook, but they are apart of Goofy's dream to have a life of fun and adventure.

Captain James (Ravello) Hook – Leader of the pirates, who was one of Blackbeard's boatswain and the only man Long John Silver ever feared. This list consists of about 22 pirates. 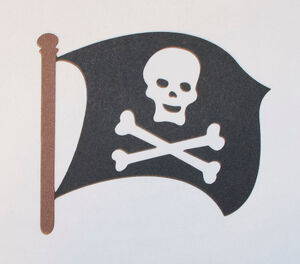 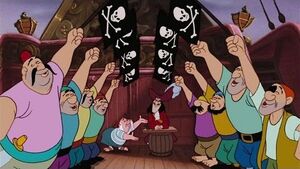 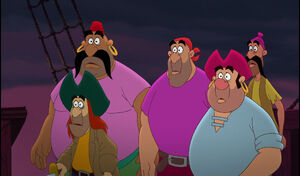 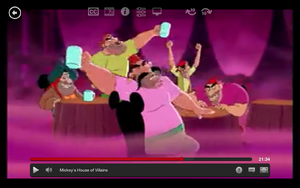