Neverwas
Neverwillbe
Nothing
Entities that Never Did Exist

The Neverwere are recurring antagonists in the Wanderer's Library Wiki, the sister-site of the SCP Foundation Wiki. They are a group of non-existent entities predating creation itself and are unable to exist in accordance to the laws of the multiverse. Currently, the Neverwere reside outside of creation, but they want to exist by entering creation, thus making them a huge threat to reality.

They are known to be lurk outside of the Ways and are some among the main dangers to the Wanderer's Library. They are the main antagonists in the "The Serpent Sequence/The Sisters Saga" series set in the "Resurrection" canon.

As wanderers who traveled through the Ways, interdimensional roads connected to the Wanderer's Library, exchanged legends between themselves, some of these stories became forgotten, and the wanderers were left lost without finding themselves. This caused the Ways to slowly grow darker and miserable, eventually culminating in the manifestation of the Neverwere and began stealing the existence of others in order for themselves to exist, but as one achieved their new existence their brethren would attack it the same way it did with its victim.

The Librarians first became aware of the Neverwere when they began secretly devouring several wanderers crossing the Ways before moving onto the Library's books, consuming the knowledge contained within the books during the time between the reading from the wanderers and their placement in the shelves, more specifically the Neverwere were stealing nouns, appositives and clauses necessary for comprehension. This caused panic between the wanderers and the Librarians and tried to protect the books from this event which came to be known as the Dread, but to no avail. As months passed with the Dread slowly increasing, fewer and fewer wanderers came to visit due to fear of disappearing or taking with them the entities responsible when returning to their home. Thankfully, a wanderer and several Docents and Sentinels were able to locate one of the Neverwere to a single shelf and used their powers to restrain it and cast it out through a Way, resulting in the Library becoming fuller and more lively again. The Librarians named them the Neverwere and became wary of them.

When a Way near the SCP Foundation's Site-17 was damaged, it transformed into a creature resembling a faceless, pale and scaled humanoid. The Foundation attempted to capture it, but it fought back, attacking Dr. Jack Bright which caused it to become possessed by Bright's SCP-963. One Neverwere inhabiting the Way, after seeing that the Way had obtained a soul, saw it as an opportunity to take over the humanoid anomaly and manifest itself as a Way. However, since this would lead to an explosion that could destroy the entire Earth and leave a hole in the universe where the planet once was, several members of the Serpent's Hand tried to intervene by freeing SCP-239 since she was the only one powerful enough to stop this, but the Foundation, ignorant of the situation, stopped them and even captured one of them named Joanna Cross.

This prompted the Black Queen and her companions to break inside Site-17 using a special Way. They entered SCP-239's chamber to free her, but she revealed to them that she had in fact been awaken this entire time and after informing her on what to do she quickly rushed outside the site in order to face against the being. Upon coming face to face with each other, the Neverwere began unleashing its powers and despair in an attempt to kill 239 and destroy the world, but she was able to use her powers to fight back and undo the damage it was causing. While the members of the Hand tried to metaphysically plant their "focus plants" to assist 239 in defeating the Neverwere, the entity was able to get to the girl's mind through the idea of arachnophobia personified as multiple spiders, filling her with fear and using her telepathy to get to the members. Luckily, a part of her mind which was unaffected helped 239 to use her powers to become the queen of the spiders in order to purge the fear and take control of the spiders before transforming their webbing into cotton candy which trapped the Neverwere in place. As the Neverwere attempted to free its host, SCP-239 tapped into its mind, but as she was doing so she became overly exhausted because of the foci plants not being planted yet which allowed the Neverwere to try and kill her for good. However, 239 was able to fight back again and continued to struggle with the entity, causing the Neverwere to infect her mind again with its despair but she was barely able to reflect the attack to the sky which exploded and began destroying the world while 239 instantly fixed the damage.

As the battle raged on, the world was transformed into thick water which engulfed everyone, including 239 who was losing herself again due to the Neverwere tormenting her inside her mind. Seeing that SCP-239 was in its grasp, the Neverwere let go of the Black Queen and the other Hand's members. This counteracted as it allowed the members to perform their magic on the focus plants which blossomed and gave 239 enough adrenaline to regain herself and stop the world from being destroyed. As both the Way and Neverwere were indestructible, she decided to heal both of them by removing the Neverwere from the Way's core and finally giving the entity existence, causing all of them to disperse into reality while the world was saved. In the aftermath, the Neverwere was reborn as a human child inside a maternity ward near Site-17, having finally achieved existence.

Being fictional characters who were conceptualized by writers but never written upon or were left completely forgotten, the Neverwere greatly varied in appearance, with each possessing its own unique appearance.

The Neverwere are entities which cannot exist in accordance with any law of physics. This state of nonexistence, however, grants them several powers such as reality warping, immortality as they are neither dead or alive, interdimensional travel and can steal something's existence for themselves, this works to the extent that one Neverwere is able to steal the existence of a Way. Being fictional characters who were conceptualized but never created, the Neverwere can affect the stories and information contained by the Library, consuming words used for comprehension and could also exist if someone simply wrote about them. They can also manipulate the minds of their victims, using their negative emotions to imbue their attacks, induce hallucinations and they themselves were not affected by mind manipulation. They were so powerful that they fought on par with SCP-239, one of the most powerful reality benders. Despite their immense power, the Neverwere can be killed if they succeed in achieving existence, albeit they can do it if they bypass the fundamental laws of the universe. 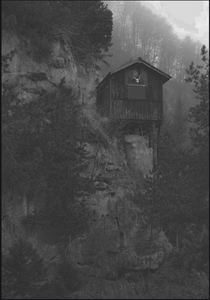 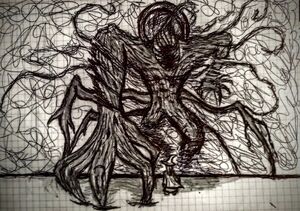