Send his wife Audery to the noose and incriminate her

Nevile Strange (whose real name is unknown) is the main antagonist of Agatha Christie's 1944 novel, Towards Zero, which is the last novel featuring Superintendent Battle and the only novel with him as the sole main protagonist. He is a sociopathic killer underneath a civilized man's disguise, attempting to kill whoever that wronged him.

Nervile also appeared as a culprit in the third season of ITV's Agatha Christie's Marple, where the novel was adapted into one of its episode, with Miss Jane Marple as the protagonist instead.

He was portrayed by Greg Wise in Agatha Christie's Marple, and voiced by Hugh Bonneville in Joy Wilkinson's 2010 radio play adaptation of the book.

According to Mr. Arthur Treves, a lawyer, during his meeting with other characters, that there was a mentally abnormal child killed another child with an arrow, which was ruled an accident. The child was given a new name and a fresh start, despite a local man having seen the child practising assiduously with a bow and arrow. Mr. Treves remembeeds the case and the fact that the child as a result of a distinctive physical feature which he does not reveal (later revealed to be Nevile's distinctive little fingers with difference to each other).

The boy was later revealed to be Nevile Strange, who later became a successful tennis player and athlete, and married a woman named Audrey. After their marriage, Audrey soon grew terrified of her husband and decided to divorce him. Nevile later married another woman named Kay, but he remained resentful to Audrey and decided to take her down for revenge. After her divorce, Audrey was supposed to be married to Adrian Royde, the brother her cousin Thomas Royde, until he died of a car accident. It was revealed that Nevile murdered Adrian by running him over with his motorcar.

After the talk with Mr. Treves, Nevile decided to killed the lawyer before he could identify him. To kill his first victim, Nevile hung a sign of "Out of Order" on the door of the lift, faking its impaired state, and forced Mr. Treves to climb upstairs. Because of his age and bad health, Mr. Treves soon died of heart attack while climbing the stairway.

Later that night, Lady Tressilian was troubled by Mr. Treves' death and quarelled with Nevile with the problems over Kay and Audrey. Nevile left and swung the ring to call the maid, faking his alibi and killed Lady Tressilian vengefully with a modified tennis racket, faking the murder weapon as his own golf club, so that he would be suspected at first and considered innocent once the murder was over. He later staged the murders all the way to make everyone suspected that Audrey was responsible.

Later, when Audrey was arrested, Battle suspected that Audrey was framed since her attitude reminded him of his daughter, who was pressured into confessing a stealing she did not commit just a couple of days ago. As a result, he believed that Audrey had the same situation and decided to help her. With the help of Angus MacWhirter, who witnessed someone swimming from the shore and climbed into the house through the roof, Battle soon discovered that Nevile, who was the only suspect that was a skilled swimmer, was truly responsible for the case. Every plan he had staged was all the way towards zero - the junction when Audrey was trialed and hanged for Lady Tresilian's murder.

Eventuallu, Nevile broke down mentally and confessed everything in front of the astonished guests. Battle also recognized Nevile as the same murderous child whom Mr. Treves, and he arrested him for the murder of Lady Tressilian. While there were implication that Nevile killed Mr. Treves and Adrian Royde, there were no sufficient evidence to support them. Still, Audrey's name was cleared and she was released, while Nevile was put on court, now a mentally broken man whom Battle mused that he might not even withstand the trial.

Convinced by Battle's words and decided to move on from Nevile, Audrey now enetered a new rpmantic relationship with Angus MacWhirter, whom she met a year ago by saving him a suicidal attempt, above the very same cliff where MacWhirter witnessed Nevile swimming back to the crime scene. 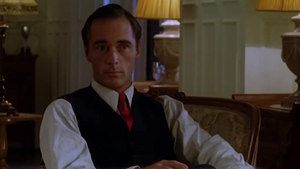 Retrieved from "https://villains.fandom.com/wiki/Nevile_Strange?oldid=4022166"
Community content is available under CC-BY-SA unless otherwise noted.