Neville (Japanese:パパーラ), also known as The Bookish Father, is the first Portrait Ghost Luigi encounters in the videogame Luigi's Mansion. Neville is a blue ghost with green eyes, orange hair and a mustache, and wears a purple robe. He is the husband of Lydia, and the father of Chauncey, Henry and Orville. In his lifetime, he was a book reader.

Neville is first seen in the Study, where he is reading in his rocking chair while ignoring Luigi, aside from making books fly off a shelf to hit him. To capture Neville, Luigi must have his back turned to the ghost until Neville stretches and yawns, at which point the player can stun him and vacuum him up. Once captured, the Study lights up and a chest containing a key to the Master Bedroom appears.

If Neville breaks free from the suction of the vacuum, Luigi will need to wait and catch him off guard again. 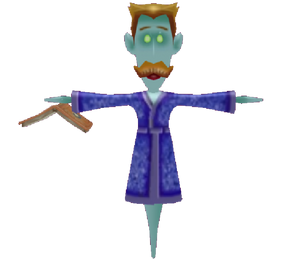 Retrieved from "https://villains.fandom.com/wiki/Neville_(Luigi%27s_Mansion)?oldid=3366895"
Community content is available under CC-BY-SA unless otherwise noted.