Neville Sinclair is the main antagonist of the 1991 film The Rocketeer.

He was portrayed by Timothy Dalton, who also played Simon Skinner in Hot Fuzz and Rassilon in The End of Time.

At first, Sinclair is seen as a Hollywood film star but is actually a Nazi secret agent. He hires a mobster named Eddie Valentine to steal a rocket pack from Howard Hughes' factory, but the device is found by a stunt pilot named Cliff Secord which forces Sinclair to send Valentine and his mobsters to reclaim it.

Meanwhile, Cliff is confronted by mobsters and a stray bullet punctured the rocket pack's fuel tank, though this is covered with chewing gum. Sinclair later kidnaps Jenny and attempts to seduce her at his villa, but she knocks him out after learning that he is a spy. However, Sinclair recaptures her and tells Cliff that he will let her go in exchange for the rocket pack.

Cliff meets with Sinclair, Lothar and Eddie's gang before revealing to the group that Sinclair is a Nazi spy. Hearing this, Eddie and the other mobsters turn on him but Sinclair summons a large group of hidden SA German commandos to hold them at gunpoint. Sinclair and Lothar take Jenny aboard a Zeppelin airship and escape, but Cliff uses the rocket pack to fly after them.

On board the craft, Cliff and Sinclair fight and Jenny accidentally sets the cabin on fire with a flare gun, prompting Sinclair to take the rocket pack from Cliff in order to save himself. However, Cliff manages to remove the patch of chewing gum from the rocket pack which causes it to ignite and malfunction. A screaming Sinclair is then sent hurtling with the faulty rocket pack into the last four letters of the 'Hollywoodland' sign, exploding and killing him on impact.

Sinclair appalled by the performance of one of his fellow actors

Sinclair having dinner with Jenny Blake

Sinclair after knocking Jenny out with chloroform

Sinclair with his henchmen

Sinclair with the rocket pack 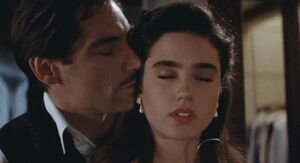 Retrieved from "https://villains.fandom.com/wiki/Neville_Sinclair?oldid=4102183"
Community content is available under CC-BY-SA unless otherwise noted.