Homicidal Robot
New Freddy, or just simply Funtime Freddy, is a minor antagonist in Five Nights at Freddy's: The Fourth Closet. He serves as the alternate counterpart of Funtime Freddy from Sister Location, and a secondary mascot at Circus Baby's Pizza.

His head appears to be squarish and less bulky than Withered Freddy's. He has a mauve purple color on his stomach, shoulders, elbows, knees, insides of his ears, cheeks, thighs, knuckles from his right hand, and the top areas from both feet. Like the other animatronics, he has faceplates that can pop open. For some unknown reason, he has double faceplates. It seems as if he is the only animatronic to have two sets of faceplates.

In his left hand he holds a microphone, similar to Circus Baby. Unlike his game counterpart, the Bonnie Hand Puppet (which resembles Classic Bonnie and Toy Bonnie) doesn't replace his left hand.

Like Funtime Foxy, Funtime Freddy has a small, round speaker in the middle of his chest. He also has a black bowtie right under his chin, a black circle on the back of his hand and two black buttons on his stomach.

Freddy is first seen in Chapter 13 hunting Jessica and Carlton through the underground of Circus Baby's Pizza, until Carlton manages to make Funtime Freddy crash into a merry-go-round and mechanically mutilates him. Near the end of the novel, a mutilated Freddy grabs on to William Afton's leg, which leads William to step on his face, dislodging the animatronic bear's jaw.

However, Mangle, the Baby Crawlers, and the mutilated Freddy attack William, dragging him into a furnace where William was burned to death, and additionally freeing Michael and the other children's souls. 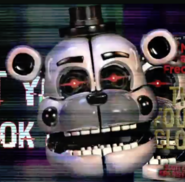 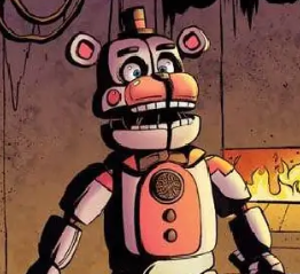