Overthrow Zuko and reinstate Ozai as Fire Lord of the Fire Nation (failed).

The New Ozai Society is a Fire Nation rebel reactionary organization that was formed after the defeat of Fire Lord Ozai at the hands of Avatar Aang in 100 AG. Their mission is to overthrow Zuko in favor of Ozai, viewing Zuko as weak ruler and a traitor of the fire nation. They originally first appeared in the Avatar comic Rebound as only one-shot villains with a brief mention in The Rift comic trilogy, as well as one of the primary antagonistic factions of the Smoke and Shadow comic trilogy.

On the Day of the Black Sun, Bumi freed himself and liberated Omashu (which had been renamed New Ozai under the Fire Nation's rule), ending the governor's control of the city and forcing him to leave.

Following Zuko's ascension to the throne, the governor, Mai's father, had been offered a desk job in Zuko's new administration. Despite this being a better treatment than most of those loyal to Ozai, Mai's father rejected the offer, believing it to be Zuko's way of keeping tabs on him. Growing increasingly unsatisfied with Zuko's leadership, Mai's father formed the New Ozai Society with the goal of deposing Zuko, viewing him as a traitorous usurper, and reinstating Ozai to restore glory to the Fire Nation.

Mai first discovered the existence of the New Ozai Society when on a date with one of its members, Kei Lo. He was sent by her father to bring her to a society meeting, where she was horrified to see that he brought her little brother Tom-Tom to the meeting as well to try and get him to join the society. Mai took Tom-Tom away, fighting off members of the New Ozai Society, betraying her father, and knocking out Kei Lo as she departed with Tom-Tom. 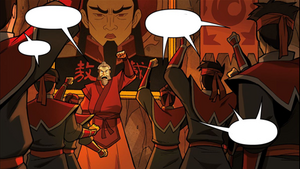