Killing anything and everything that is not Ripley 8.

The Newborn was a Xenomorph-Human hybrid, born to the Cloned Queen and the final antagonist in the 1997 film Alien: Resurrection.

The Newborn was born to the Cloned Queen, shortly after Ripley was taken to the hive and fastened to the walls via its webbing. Due to the human DNA the queen possessed, she had stopped laying eggs, with the egg sac becoming a womb for the new creature, and gave birth in a manner similar to a human. The mother and the child stare into each other's eyes. However, the Newborn sniffs, recoils from and ultimately rejects the queen. It attacks her, knocking her head clean off and giving a victorious roar as she dies.

It quickly notices Ripley, approaches her, and affectionately licks her with a human tongue, regarding her as its true mother. It then turns its attention towards the trapped Dr. Gediman, observing him momentarily before ultimately biting down on his head and killing him.

It finds its way onto the ship as the remaining Auriga survivors escape, murdering Distephano and attempting to murder Call as well, but Ripley intervenes and distracts it. Cutting her palm on one of its teeth as she touches it, she flicks the acidic blood towards a window, then grabs onto to some nearby metal chains for support as the vacuum of space pulls the newborn away.

Despite its impressive strength, the Newborn inevitably collides with the window and is violently ripped apart, piece by piece, into the vacuum of space. The creature's cries of pain, coupled with the fact that it regarded Ripley as its mother, made the scene painful for her to watch as the Newborn is ripped to the bone.

The Newborn was a grotesque creature with human and Xenomorph characteristics. It had fair, skin though the skin was gleaming and slimy like a Xenomorph. Its face was overall humanoid, though it lacked a nose. There were two deep eye socket-like pits in its face where beady, black eyes sat. Its tongue was long, like a xenomorph's, but human in color and overall appearance. The Newborn was bipedal, its head fused to its back and its gut hanging forth. It lacked a tail, and had long spindly arms and legs, long fingers, and sharp claws tipping those fingers.

The Newborn exhibited both traits of its human and xenomorph makeup. It was violent and a killer, like a Xenomorph, but express curiosity like a child and devotion to its mother. This made for a dangerous combination, with the newborn killing other humans it encountered like a child might squash a bug. 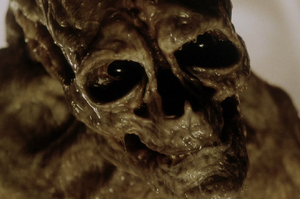 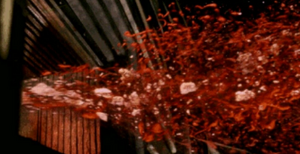 The Newborn's death
Add a photo to this gallery 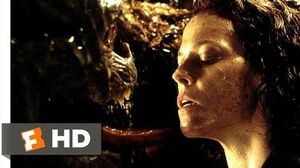 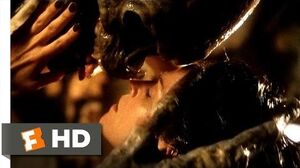 Retrieved from "https://villains.fandom.com/wiki/Newborn?oldid=3769721"
Community content is available under CC-BY-SA unless otherwise noted.