Get rich quick with the bottle deposit scam.

Cause annoyance in Jerry's personal life.

Newman is the main antagonist of the TV sitcom, Seinfeld. He is a scheming, treacherous mailman who upholds a constant rivalry with Jerry Seinfeld, the series' main protagonist. Although he isn't really considered evil (for the most part), he is the closest thing the show has to a main antagonist, even having a despicable and evil laugh. In saying that, however, sometimes he can be heroic if not having a neutral role.

He was portrayed by the famous actor, Wayne Knight, who also portrayed Dennis Nedry in Jurassic Park, and later voiced Al McWhiggin in Toy Story 2, Emperor Zurg on Buzz Lightyear of Star Command, The Penguin in Harley Quinn, and Krudsky in Scooby-Doo and The Goblin King.

Newman was created as a counterpart to the Jerry character, though the reason for their animosity is never revealed. Seinfeld once described Newman as Lex Luthor to his Superman. Knight has described him as "pure evil," as did Jerry.

Newman's role is primarily as a villain/enemy to Jerry and a collaborator in Kramer's elaborate and bizarre schemes. Often described as Jerry's "sworn enemy" ("The Andrea Doria"), Newman is truly cunning and manipulative, as he often schemes against Jerry. He speaks often in a humorously sinister tone (mainly to Jerry). Jerry refers to Newman as "pure evil" on more than one occasion. The two generally greet each other by saying hello to each other with particular tones; Jerry extremely distrustful and baleful and Newman falsely effervescent and jovial.

The origin of the Seinfeld/Newman feud is never revealed. Newman's dislike of Jerry appears to stem from resentment at Jerry's status as a relatively famous comedian. Newman considers Jerry to be undeserving of his fame, referring to Jerry's audience as a "half soused nightclub rabble" and referring to Jerry's comedy as "making observations". Newman's own talents as a poet and wordsmith are considerable, yet similar recognition to Jerry has so far eluded Newman. When asked about why the character Jerry hates Newman, Jerry Seinfeld explained it in the Season 3 DVD inside look of the show:

Newman is a frequent source of annoyance to Jerry, such as in attracting fleas to the apartment ("The Doodle"), and generally making Jerry's life more difficult. However, the depth of Jerry and Newman's enmity seems to vary between episodes — or even within the same episode ("The Soul Mate") — and Jerry sometimes seems to consider him merely an annoying and argumentative neighbor, rather than an outright enemy. At times they even work together on some scheme, though with some reluctance on Jerry's part (and usually with mutual friend Kramer as a buffer). In "The Old Man", Jerry casually mentions "a couple of friends," referring to Kramer and Newman. In "The Blood", Newman even does a considerable favor for Jerry, seemingly without ulterior motives (though the nature of the favor actually makes it quite distressing to Jerry). In any event, Newman often seems quite amused at how effectively he irritates Jerry (which of course only irritates Jerry all the more), although any battle of wits between them rarely leaves Newman the victor. Jerry and Newman also attended Super Bowl XXIX together, but only due to a ticket mix-up.

Newman is a good friend of Kramer's, and the pair are forever participating in various get-rich-quick schemes. In "The Bookstore", Newman and Kramer decide to use a rickshaw to transport people from place to place. In "The Old Man", Newman and Kramer try to find valuable records to sell for cash. "The Bottle Deposit" features the most creative scheme between Kramer and Newman to bring many deposit bottles (5 cents in New York) in a mail truck all the way to Michigan (10 cents each). Even Newman's friendship with Kramer, however, can be overcome by Newman's obsession to win in any situation; in "The Label Maker", he and Kramer play a game of Risk and when Kramer leaves the game board in Jerry's apartment for safekeeping, Newman goes so far as to sneak into Jerry's apartment via the fire escape with intent to rearrange the pieces' layout in his favor, although he is detected and flees before he actually changes anything.

As Kramer puts it in the episode "The Reverse Peephole", Newman can climb trees "like a ring-tailed lemur", a skill that he claims to have learned in the Pacific Northwest. Despite his girth, Newman is a "fantastic" tennis player and a nimble runner. He is seen running athletically in several episodes. In the finale Newman claims to be one quarter French. In "The Label Maker", Jerry even agrees with George that Newman is "merry", which appeared to be a compliment of sorts.

Newman takes his job as a mailman with pride but, paradoxically, is portrayed as a lazy worker with such habits as not working when it is raining or hiding bags of mail in Jerry's basement storage locker rather than delivering them. Despite such clear lack of respect for mail, he nevertheless impulsively protests the idea of any mail being considered "junk". He is sometimes known to use his job for corrupt purposes, such as purposely withholding mail (often utility bills or the like) for blackmail revenge, or using the Union to get himself out of jail.

Newman's angry rants directed against Jerry and, at times, the United States Postal Service in various episodes tend to be acquiescent, bombastic, and verbose, displaying an impressive command of language. One of his most well known speeches takes place in "The Finale Part 1", after Jerry refuses to take him to Paris, in which he extravagantly describes his day of reckoning.

There are a couple of episodes where Newman serves other roles than Jerry's enemy and Kramer's friend. He collaborated with George in The Calzone in an attempt to find another way to get a calzone to George Steinbrenner. He fell in love with Elaine for a few episodes, but the incident ends in "The Reverse Peephole", in which Elaine tries to get a fur coat back for Joe Mayo.

He has a few friends from the post office and girlfriends in a couple of episodes. One moment in "The Bottle Deposit", after he is dumped from his mail truck, he seeks refuge in a farmer's, but is kicked out for having sex with the farmer's daughter, who calls him "Norman". Newman was also seen with a supermodel after his birthday wish comes true in "The Betrayal". 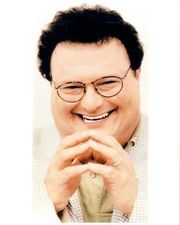 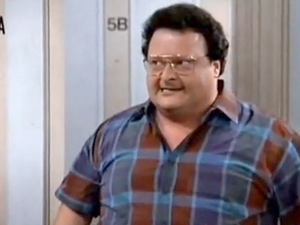