Helping his friends fight against WICKED.

Newt is one of the main protagonists of the Maze Runners series.

He initially appeared as an ally in all of the series that he appeared in until he became infected. As the time went by, the infection started to change him into revolting against his fellow allies. The infection at the end made Newt pass-away.

He was portrayed by Thomas Brodie-Sangster.

Newt appears to be a 16 - 17-year-old blonde haired teenager, having dark brown-black eyes and a square jaw.

In Maze Runner: The Death Cure, Newt got infected by a virus. He, with his team-mates, went to rescue Minho in the legendary Last City. As they went on their journey, Newt got into an argument, revealing to Thomas that he is infected.

They eventually rescued Minho from the facility, but Newt's virus starts becoming worse and worse, to the point it's impossible for Newt to stand up on his own feet. Because of this, Thomas brought Newt to the facility, trying to cure him from the virus which was a failure. Eventually, Newt got totally infected, turning evil, starting to brutally attack Thomas, to the point of wanting to kill him.

As the battle between the two continued, Thomas stabbed Newt, killing him. Once the massive war in the Last City finished, they moved to a new island. On the island they created a sculpture where they wrote names of everyone which they lost, including Newt. Thomas then took the messages which Newt gave him to read. 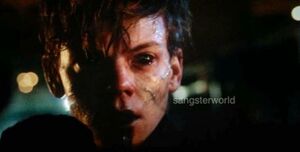 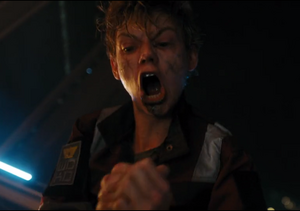 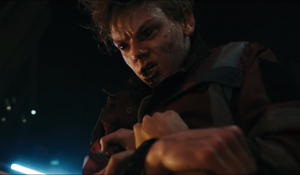 Retrieved from "https://villains.fandom.com/wiki/Newt?oldid=3028224"
Community content is available under CC-BY-SA unless otherwise noted.