Contorting others to suit her goals.

Find all of the Clockwerk Parts.

Constable Neyla is the main antagonist in Sly 2: Band of Thieves. She's an Indian tiger who was raised by Arpeggio to be a thief for the KLAWW Gang and an infiltrator within INTERPOL. Neyla conspired to steal all the Clockwerk pieces for herself and achieve immortality, for that purpose she assisted and backstabbed everyone around her, including the Cooper Gang, Carmelita, and even the KLAWW Gang.

Like Sly, Neyla had an impressive array of gadgetry and equipment, such as a paraglider and whip. She was also afforded a high-tech air vehicle, and had an intricate knowledge of machinery, as evidenced by her alliance with Arpeggio. She also had the same acrobatic skills as Sly, having the ability of running across ropes, and has the same sweet-talking ability.

She was voiced by Alésia Glidewell.

Neyla was born into poverty on the streets of New Delhi in India, and the deprived life she had there propelled her to aim high. She attended a university in Britain, where she set up an elaborate ring of students to complete her homework for her. When the ring was broken, Interpol were so impressed at her ability to foment criminal schemes that they offered her a job, as she could access the mind of the lawbreaker, which would be an invaluable asset in this capacity.

Neyla has an extremely poisonous streak, and could sweet-talk anyone into doing her bidding, which she had exploited during her life. She tricked the Cooper Gang into thinking that she was going to help them, only to betray and arrest Sly, Murray and Carmelita. Later, she was promoted to Captain after arresting the Contessa. Unknown to Interpol, she had an alliance with Arpeggio. Her alliance was fake. All she wanted was world domination and immortality. Having everyone in the world controlled by spice and hate made it easier to stay in control. Again, she betrays her ally and even killed him. She then revived and controlled Clockwerk, now formed into "Clock-La".

Constable Neyla was the assistant of Inspector Carmelita Fox. She was partnered with the Inspector following the events of the Thievius Raccoonus affair, and was present during a Cooper Gang-engineered break-in at the Museum of Natural History in Cairo. During a situation in which Sly looked complicit in the absence of the Clockwerk Parts, she seemingly bought time for Sly by mentioning the KLAWW Gang's possible involvement. It was not only a distraction but a lead to encourage Sly into chasing them down to retrieve all the Clockwerk Parts for her. Neyla's distraction worked, as Carmelita was unable to stop Sly from fleeing.

Later, Neyla met up with Sly in Paris and offered a key to Sly for the back door of Dimitri's nightclub. Seemingly now an ally of the Cooper Gang, she continued to offer help and support to them. In India she was, along with Carmelita, the Contessa and many other Interpol agents, present at KLAWW Gang member Rajan's palace undercover. She clandestinely met up with Sly and danced with him. Carmelita interjected, requesting a dance from Sly. Fox was unaware of his true identity due to an elaborate disguise employed by the thief, and Neyla stood back at this point, taking an incriminating picture of the two together. At Rajan's spice factory in the same country, Neyla once more offered her services to Sly, but machinated events to land Carmelita, Sly, Murray and Rajan in the custody of Interpol.

Murray did not yet understand why she didn't help when Sly was hurt. She was commended by the Contessa, who took charge of the arrested captives. Neyla was subsequently ordered to arrest the Contessa in Prague, and was afforded a team of mercenaries equipped with planes, tanks and other weaponry to do this. She succeeded in arresting the Contessa, and was promoted to Captain. She later tailed the Cooper Gang to Nunavut Bay in Canada, where she flew a special aircraft against the Cooper Gang during a daring train robbery. She was defeated by Bentley's RC chopper, but stayed in Canada to command a police unit to track down the escaped Interpol captives- including Carmelita.

It was revealed aboard the blimp of Arpeggio, KLAWW Gang engineer, that Neyla was in fact an employee of Arpeggio, and that she had assisted the KLAWW Gang during the entire affair. After Sly failed to pull Clockwerk apart, Neyla soon betrayed Arpeggio, killing him, and commandeered the Clockwerk Frame, which Arpeggio had reconstructed. While making their way to Paris, Neyla had to keep up her strength by draining power from the blimp's engines. The Cooper Gang planned to destroy the engines to weaken Neyla to a state in which they can attack. Once done, Inspector Fox soon contacted Bentley and offered her services to help the Cooper Gang fight Neyla in her new form, but had trouble locating the blimp.

Sly flew to the top of four radio towers, boosting their energy to give alert to Carmelita. Once she arrived in her helicopter, Sly hopped on and used its turret to take down Neyla. However, Neyla suddenly crashed into the blimp, causing it to explode. She then noticed Bentley and Murray inside the Northern Light battery and snatched them in it to lure Sly. Once Sly made his way to Neyla after soaring the blimp's debris, he attacked her in the face, causing her to crash into the streets of Paris. Before the Cooper Gang could celebrate their victory, however, Neyla was still active as she summoned a laser barrier around them. As the Cooper Gang took cover, Bentley recalled Neyla mentioning a hate chip as her source of power.

This encouraged Murray to make his way to Clockwerk's head where the hate chip is and opened its mouth to reveal Neyla, now as a holographic head, vowing to have revenge on the Cooper Gang and destroy them. Bentley then approached Clockwerk's head and placed bombs by its sides to take out the laser field. Before disappearing, Neyla threatened the Cooper Gang that they will not defeat her ever. Bentley entered the innards of Clock-La and grabbed the Hate Chip, but before he could exist the head's beak crumbled and crushed his legs. Murray saved Bentley right before Clock-La exploded and Carmelita dealt the finishing blow to Neyla by destroying the Hate Chip, causing the Clockwerk parts to slowly disappear along with Neyla.

Though Neyla was defeated, her actions permanently damaged the Cooper Gang as Bentley lost the use of his legs during the battle, leaving him in a wheel chair for the rest of his life. Murray was emotionally scarred by the incident, as he blamed himself for Bentley's injury. 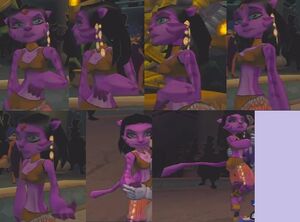 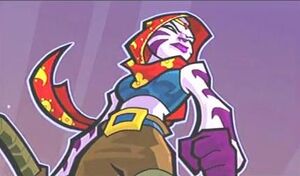 Retrieved from "https://villains.fandom.com/wiki/Neyla?oldid=4030417"
Community content is available under CC-BY-SA unless otherwise noted.