CEO of the Wallace Corporation

Find Rachael and Deckard's child in order to extract a way to produce new and improved Replicants for himself.

Niander Wallace Jr. is the main antagonist of the 2017 neo-noir sci-fiction film Blade Runner 2049, the second installment of the Blade Runner franchise after the original 1980s cult classic film Blade Runner. He is set to return in some capacity in the upcoming Adult Swim/Toonami anime prequel series Blade Runner: Black Lotus.

He is a Replicant manufacturer and the CEO of the Wallace Corporation whose goal is to find Rick Deckard and Rachael's child, who is revealed to be Ana Stelline, as she is the first replicant biologically born and could prove that replicants are more than manufactured slaves. He also is the son of the Niander Wallace, Sr..

Niander Wallace is a cold and cautious man who established Wallace Corporation. He appointed Replicant Luv as his secretary and henchwoman just after disposing of Tyrell Corporation, creator of the replicants, manufactured slaves with super strength but not considered humans. He killed his new replicants after they were born.

Niander Wallace is first seen after a replicant Blade Runner, Officer K visited the headquarters of Wallace Corp. in Los Angeles asking for the memories of a replicant whose remains where founded on a farm that belonged to a rogue Nexus 8 replicant called Sapper Morton, Luv gave K the memories of a female replicant called Rachael, who was the assistant of Tyrell corporation founder, Eldon Tyrell. Luv shows K the memories of when Rachael was interrogated by former Blade Runner Rick Deckard back in 2019, K noticed Rachael was in love with Deckard, during his visits Luv finds out the reason why he was looking for the memories, because Rachael was the first replicant pregnant but died during an improvised cesarean performed by Sapper.

Once K left, Luv informed Wallace, then Luv takes Wallace to check on a newborn replicant. Here, it is revealed that Luv helps Wallace to see using a device implanted on Wallace's neck that is synchronized to two floating cams that serve as Wallace's eyes. During the replicant examination, Wallace talks about the colonization of new worlds and how this need demands a faster replicant production, then he says that if the replicants can biologically reproduce, contradicting the myth that all replicants are sterile, then this could fasten the replicant production, Wallace sends Luv to steal Rachael's remains from the LAPD and find Rachael's child.

K's investigation to find the child leads him to an orphanage in San Diego where outcasts attack him, but is saved by an attack drone sent by Luv, allowing K to continue his task. When K arrives at the orphanage, he finds out that Rachel's child register's where stolen - and that he could be the child - as he finds a wooden horse from a memory of his past in there. This makes him seek help from Dr. Ana Stelline, the creator of memories for Wallace's replicants. Stelline confirms K that the memories are real. Shocked with this, he returns to LAPD, but fails his replicant obedience test and must be "retired". However, his superior, Lt. Joshi, trusts in him and lets him escape. K gets the wooden horse examined and this leads him to Las Vegas where he finds Deckard.

Luv looks for K in his apartment and the LAPD but when she doesn't find him, he interrogates Joshi. She gets no answer from her, so she kills her and uses her computer to track K. When Luv arrives to Las Vegas, she and Wallace's men kidnap Deckard and beat up K, leaving him to die, but he is rescued by the Replicant freedom movement, who tell him that Rachael's child is actually female, and orders K to kill Deckard before he reveals the child's location to Wallace.

Luv takes Deckard to Wallace (the second and last time he appears), who then interrogates him and uses recordings from when Deckard met Rachael at Tyrell Corporation to break him. He then offers Deckard a clone of Rachael in exchange of information. Deckard refuses, so Wallace orders Luv to kill the clone and take Deckard to the OffWorld Colonies to be tortured. Wallace is never seen after this.

K intercepts Luv's convoy, rescues Deckard and kills Luv, but he gets mortally stabbed and shot by her in the process, K fakes Deckard's death and takes him to Dr. Stelline. After deducing she's his daughter, K succumbs to his wound while Deckard meets with his daughter after 30 years.

Niander Wallace is set to return in a possible third installment as the main antagonist.

Niander Wallace was an extremely sophisticated and smart man. He talks in a smooth and calm way with the people that confront him, and is never in the entire movie seen losing his temper, something a lot of other characters did. No matter who is talking with him, he will retains a good-mannered and nice tone. Despite all of his sophistication, there is a monster inside of him that he never directly reveals, but it still is there. As mentioned before, he killed his new replicants right after they were born, and enjoyed the amount of pain the replicants got. He also, at times, seemed to see himself as a god, and states that he is a father of millions, which, while partially true, is said in a narcissistic way. Wallace is blind, so he uses two floating cameras as eyes that operate with a device on his neck, moving around at Wallace's will. 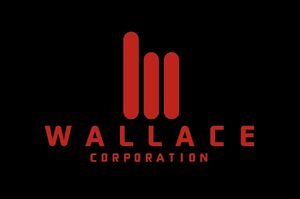 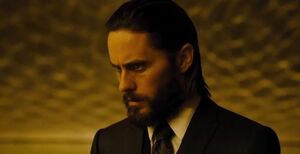 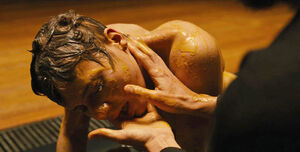 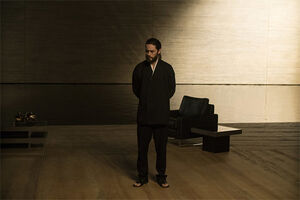 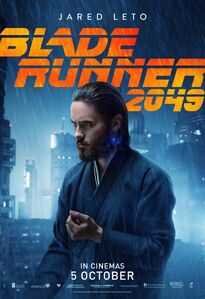 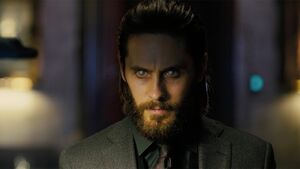