Eunice 'Nice' Noronha is the main protagonist / antagonist of the soap opera "Anjo Mau", broadcast by Rede Globo in 1997. It is based on Nice from the first version of "Anjo Mau", played by Susana Vieira in 1976. A poor girl who soon tires of the life she leads in the humble neighborhood where she lives and decides to marry a millionaire in order to rise socially and to belong to the ruling class.

She was portrayed by Glória Pires, who also played Rachel Araújo Assunção in the second version of the novel "Mulheres de Areia".

Nice is an ambitious woman who does not conform to the life she leads and who wants to marry a rich man who gives her the luxury and comfort she so badly needs. A person who is willing to do anything to make money, even lie, steal and blackmail if necessary.

The "Bad Angel" in the story is Nice a poor, beautiful and ambitious girl who does not conform to humbler professions as a worker and clerk, always being dismissed for carelessness. She lives in a modest neighborhood with her foster family: her mother Alzira, a battling and suffering woman with whom she always lives in friction; the younger brother Luiz Carlos, who has true adoration, beautiful and gallant that also does not stay in any job; his younger sister Antonia, known as Toninha, a generous and unambitious young man; and the father Augusto, funny man, who is intent on knowing everything and makes many gaffes since his explanations are always confusing.

The mother, Alzira, a bitter woman, is the only one who can perceive her daughter's wickedness, always keeping an eye on her steps.

Unhappy with her life, which she considers to be mediocre and out of perspective, Nice is filled with hope when a job opportunity arises at the Medeiros mansion, where her father has been a driver for years. She accepts the job of babysitting Stela's son and soon realizes in Rodrigo, the employer's brother, a way out of her problems. Nice decides to win him over, though he is engaged to the ambitious and spoiled Paula, and goes over all to achieve her goal; but really falls in love.

Nice ends up making Rodrigo discover Paula's romance with his own brother, the womanizer and bon vivant Ricardo, and this results in the death of Dr. Eduardo Medeiros, father of Rodrigo, Stella and Ricardo. Ravaged, Rodrigo becomes an insensitive man who no longer believes in women. To get revenge on his ex-fiancé, he goes out with Nice, but soon feels guilty about using the maid. Heartbroken, she begins to relate to Ligia, who belongs to her social class and is in love with him since she was a girl. But Luiz Carlos, Nice's brother Luka, also gets involved with the girl, and becomes Nanny's biggest weapon to get her out of Rodrigo's way.

Nice, figuring this could be her chance to rise socially, takes advantage of the discoveries she makes at the mansion to foster intrigue and try to get close to Rodrigo, a seductive and caring man, who she really falls in love with. He is the firstborn of Edmundo Medeiros, a serious businessman who worries about the future of business, because he does not consider his sons - Rodrigo, Ricardo and Stella - in a position to take his place. He struggled hard to get what he has today and does not understand the disinterest of his children. She lives with her mother-in-law, the funny Grandma Carolina, who spends all day walking around the house, watching and scaring everyone in her moments of lucidity.

Nice finally manages to marry Rodrigo and gets pregnant. Paula, Rui and Olavinho team up against Nice to defeat her. However Paula kidnaps Nice who begins to feel labor pains. more Rodrigo manages to arrive on time and save his beloved. Paula is taken to jail and plays crazy. Nice's birth, however, is not easy, and the ex-nanny, with severe health complications, is on the brink of death. On the hospital bed, she receives a visit from Alzira, who apologizes to her daughter for rejecting her, and from Rodrigo, who declares his love and begs her not to leave him alone with her son. But Nice faints and falls into a coma, leaving her husband desperate. Some time later Nice reappears at Rodrigo's house during a dinner that gathers the entire Medeiros family. Everyone is very surprised by her arrival, and the ex-nanny says she is leaving with her son to get to know each other better and rescue the good person she knew she was. The soap opera ends when Nice, with her baby in her arms, is very surprised to find Rodrigo on the same plane he is traveling on. In the last scene, the two toast to the beginning of a new life. 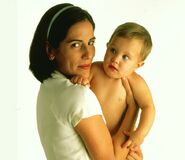 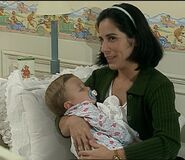 Add a photo to this gallery
Retrieved from "https://villains.fandom.com/wiki/Nice_Noronha_(1997)?oldid=3612470"
Community content is available under CC-BY-SA unless otherwise noted.