Nicholas "Nick" Brody is an antagonist in the American television/drama thriller series Homeland.

He was portrayed by Damian Lewis, who also played Yassen Gregorovich in the movie adaption of Stormbreaker.

Brody is a USMC Sergeant who is held as a prisoner of war by al-Qaeda terrorists for eight years along with partner Thomas Walker. During his imprisonment, Al-Qaeda leader Abu Nazir shows him kindness and brings Brody into his home to teach his young son Issa English. Brody comes to love Issa like a son, so when the boy is killed in a drone strike ordered by U.S. Vice President William Walden, Brody is heartbroken and outraged; Nazir then manipulates him into agreeing to commit a suicide bombing in the U.S.

Brody is rescued by Delta Force troops, and hailed as a war hero on his return to his country, but CIA officer Carrie Mathison discovers that Brody is working with al-Qaeda against his own country. Brody soon becomes Carrie's lover, endangering hius relationship with his wife Jessica and children, Dana and Chris. Carrie eventually has a mental breakdown, and her investigation of Brody is discredited.

Brody procures a bomb-vest from one of Nazir's underlings and puts it on at a White House event, intending to kill Walker. At the last moment, however, he gets a call from Dana, and the sound of her voice convinces him not to go through with the bombing. That night, he kills Walker, who had been his accomplice, to prove to Nazir that he would be more useful corrupting the U.S. Government from the inside.

In Season 2, Brody becomes a Congressman, and Walden is grooming him to be his running mate in the upcoming U.S. election. Secretly, Brody works with Nazir's agents to facilitate acts of terrorism. Carrie has been fired from the CIA, but is still convinced that Brody is a terrorist, so she convinces her former boss Saul Berenson to let her bring him in. Carrie has Brody arrested and convinces him to be a triple agent for the CIA and help them catch Nazir. Brody keeps his word and helps them foil a terrorist attack.

Brody gets a call frpom Nazir, who has kidnapped Carrie and is threatening to kill her unless he kills Walden. Brody helps Nazir remotely tamper with Walden's pacemaker, giving the ice President a heart attack; Brody taunts Walden as he dies. After Nazir killed and Carrie rescued, Brody leaves his family to be with her. The next day, however, Nazir's agent perpetrate a massive bombing that kills Walden and several government and intelligence officials, and release a video Brody had made before his aborted suicide bombing that makes it look like he masterminded the attack. With Carrie's help, Brody flees the country, becoming a fugitive.

In Season 3, Brody is on the run, living in a series of CIA safehouses and nubing his despair with heroin. Berenson finds him and brings him in to the CIA, where he is weaned off drugs and trained to lead a mission to assassinate the new terrorist leader in Iran.

Brody succeeds in his mission and kills his target, but is betrayed and left to be taken into custody by the Iranian Police, who sentence him to death. Carrie, who is pregnant with his child, attempts to find a way to free him from his predicament, but Brody resigns himself to his fate. Eventually Brody is executed by public hanging, with a tearful Carrie watching in the distance.

Carrie attempts to convince the current CIA director to give Brody a star on the CIA memorial wall, but she is unsuccessful. She instead draws a star for him herself out of respect for his unknown sacrifice and her love for him. She then gives birth to Brody's daughter, whom she names Franny. 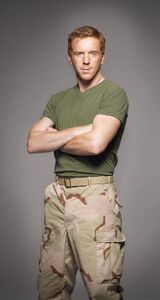