Nicholas the Renegade is a minor antagonist from the visual novel and anime series Sword Art Online, appearing only in the season one episode "Red-Nosed Reindeer".

In 2023, a virtual reality video game called Sword Art Online trapped millions of players inside it by taking away their logout option. If the player died in the game or had their Nervegear headset removed, the headset would microwave their brain and kill them in real life. Among the players trapped were protagonist Kirito and a group of high schoolers, who joined together to form a guild known as the Moonlit Black Cats.

However, on a dungeon raid, the Moonlit Black Cats were overrun, and all the members except Kirito were killed. This proved difficult for Kirito, as he had just befriended fellow member Sachi. As she died, Sachi spoke to Kirito, but he did not catch all of what she said.

Later on, Kirito hears from informant Argo that a Christmas-themed boss was going to appear under a fir tree on the 35th floor, in the Forest of Wandering. If defeated, the boss would drop the Divine Stone of Returning Soul, an extremely rare item that could resurrect a dead player. Thinking of this as a way to revive Sachi, Kirito goes out and looks for it.

On his way, he encounters a friendly guild led by his old friend Klien and a guild called the Divine Dragon Alliance. Klien and his guild hold off the Divine Dragon Alliance as Kirito goes on, finding the fir tree. Sleigh bells ring and Nicholas the Renegade falls from the sky, wielding a massive axe and having four health bars. He growls and lunges at Kirito, who attacks back.

The fight is not seen, but Kirito appears sometime later with a blank expression on his face, very low health, and carrying the Divine Stone of Returning Soul, showing that he destroyed Nicholas the Renegade. However, he throws the Stone to Klien, who reads the description and finds that the Stone can only be used up to ten seconds after a death. After some parting words, Kirito returns to his hotel to weep.

Nicholas the Renegade is silent, and only appears for a few moments. However, he is shown to be feral and violent, as he was programmed to be. He is a massive giant, and will try to crush his enemies when they come. 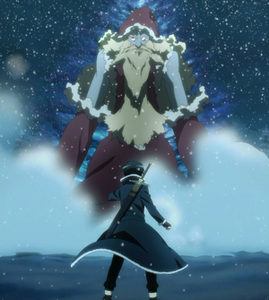 Nicholas the Renegade looms over Kirito. 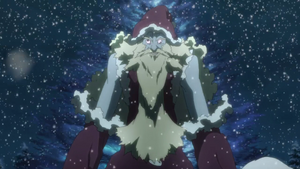 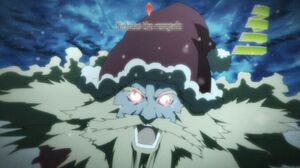 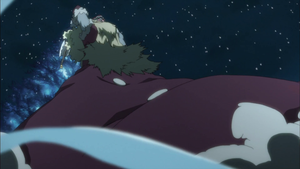 Nicholas the Renegade swings his axe.
Add a photo to this gallery 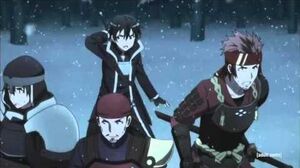 Retrieved from "https://villains.fandom.com/wiki/Nicholas_the_Renegade?oldid=3945126"
Community content is available under CC-BY-SA unless otherwise noted.