Conquer Steinau to compromise it as his abode (succeeded for many centuries, but later failed).

Take revenge of Don Andrés in a last duel (failed).

The Nitch Mart is an evil entity from Las Leyendas series. He is a monster who feeds of the fear from the people and can induce nightmares on people with a touch, personally appear in them to make things worse. The Mart as well as a shocking connection with Don Andrés.

He was voiced by Roly Gutiérrez in both Spanish and English.

If the victims realize they're dreaming however, they can turn the tables on the monster within the dream. Normally, the Nicht Mart doesn't stay in a single town for long, However, he made an exception with the German town of Steinau, fully intent on haunting them for eternity given their gall to stand up to him and of course, Don Andrés' far from noble actions during his life.

Nicht Mart is a very cruel and dastardly monster who gains sadistic pleasure in watching others suffer. While the Jersey Devil was bestial and monstrous, The Mart is very intelligent, smart enough to speak in human tongue and manipulate ones fears to create their own living hell. The Mart typically didn't haunt towns for very long, but in the case of Steinau, The Mart made an exception to haunt them for eternity given their gall to stand up to him.

His arrival in Steinau goes back centuries ago, when he attacked the town and fed every night of the deepest fears of the people. They asked for help to make it out of there, then a knight in elegant armor who wielded a gleaming sword would agree to expel it if they offered him an immense fortune in gold. What that foreigner did not know would only bring more calamities if they obeyed him to take vigor towards the monster, in doing so, the stranger from distant lands would take the opportunity to flee with the booty, leaving the population in the claws of the enraged Mart, after having provoked it (believing he would go find another place).

We're introduced to this supernatural monstrosity when Leo lays down to sleep after the crew found themselves in a town inhabited by sleep-deprived people. Leo soon finds out why they're so sleep-deprived when the Nicht Mart stabs its fingers into his head and forces him to dream horrible nightmares. The only way to fight back against it is to not be afraid of it, causing it to flee to another town. Thanks to Don Andres actions during his life, however, the Nicht Mart refuses to leave the town it settled in and continues feeding on their fear every night for generations until its defeated.

He is not named at any point in the series after having been defeated years ago, when Quetzalcoatl plotted to take over the world, requesting the collaboration of several legendary monsters at his disposal. Despite his absence, he is referenced in a statue, kept in the vault of Don Andrés' descendants, commemorating his blatant acts of cowardice (including his escape from Steinau by stealing gold from the villagers and leaving them captive on the Mart). When Don Andrés, with his team and Marcela's were caught by the demigod Anansi, he made him see an illusion of his worst fear: The Nicht Mart appearing turned into a windmill. 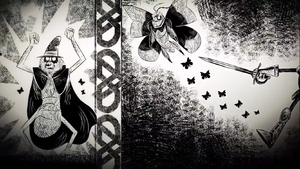 The narration of the Nicht Mart and how it ended up cursing the city of Steinau. 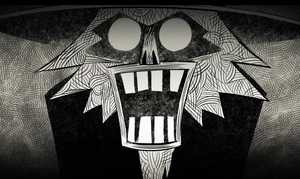 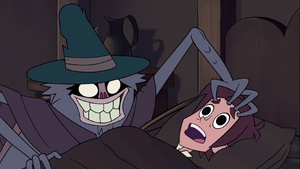 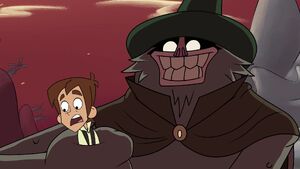 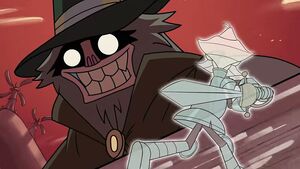 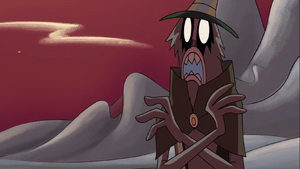 Nicht Mart's death.
Add a photo to this gallery 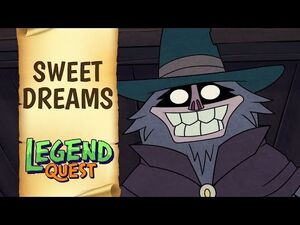 Retrieved from "https://villains.fandom.com/wiki/Nicht_Mart?oldid=4154283"
Community content is available under CC-BY-SA unless otherwise noted.