To kill Zane Morgan through any means necessary (failed)

Nicholas "Nick" Ford is one of the two main antagonists of season 2 of Bates Motel (alongside Zane Morgan).

He was portrayed by Michael O'Neill.

Nick Ford was a drug lord who was married to a woman named Nancy, and they had a daughter together, Blaire Watson. Whether his wife died or left him remains unknown. It’s implied throughout the season that the two didn’t get along, though he still loved her and at times tried to persuade her to come back home with him-even having his business manager call her on occasion. At some point in his life, Nick had Gil Turner’s brother in law and his men murdered due to them being his competition in the marijuana trade.

Four months have followed since Blaire was murdered by one of her students, Norman Bates-and Nick went to White Pine Bay, Oregon to find her killer. He showed up at her grave at the same time as Norman-who had no memory of killing Blaire and thought Nick might be her killer. He starts taking pictures of Nick, and Nick chases him away when he catches him doing it.

At some point, Gil was murdered by Bradley Martin for killing her dad, and his nephew, Zane Morgan, took over the business in his place. When sheriff Alex Romero confronts Nick Ford at Blaire’s grave, Nick berates him for focusing too much on Gil’s death rather than that of his daughter’s. Suspecting Nick of murdering Gil, Zane kidnaps one of Gil’s men and kills him to send a message to Nick. Nick later kills two of his men out of revenge.

Nick begins planning to kill Zane and starts getting closer to Norma Bates-the mother of one of Zane’s employees, Dylan Massett-to get closer to killing Zane. He first meets Norma outside of a party she had been attending one night, and offers to help postpone the bypass that will be interfering with her business in her motel. He gives her his card and drives off.

Norma meets with Nick on his boat the next day, and confides in him her problem with stopping the bypass due to councilman, Lee Berman’s, stubbornness to postpone it. Nick ends up giving him a card for one of his employees, who was able to postpone the bypass for environmental reasons. But unbeknownst to Norma, Nick had other plans far more malicious, and ended up having Lee Berman murdered, and has his death look like a car accident. He tries to have Zane Morgan killed, though this attempt was foiled by Dylan.

When Norma gets word on Lee’s death, she meets with Nick the next day, talking about how sad his death was. Though Nick calls his death “convenient”, therefore subtly implying his involvement and making Norma uncomfortable. She then tells him she can stop the bypass by herself. Things get even more heated between him and Zane once the latter has some of his men kill some of Nick Ford’s men at their grow house.

Nick finally goes over to Norma’s office in her motel and tells her about Dylan and Zane-trying to persuade her to get them to meet, though all she does is kick him out-though Nick refuses to give up on his demands. He later shows up at house and meets Norman while waiting for Norma. Norman explains why he took pictures of him, and Nick notices that he and Norma have a bond. When Norma shows up, she tells him she couldn’t find Dylan (though in actuality she did go to him) and he tells her she’s not being smart. Norma kicks him out and threatens to call Romero if he doesn’t leave. Nick leaves, but not before calling her out on her ignorance once more.

Dylan ends up calling Nick and they meet at a pizza place. Nick tries to order Dylan to kill Zane or else the drug war will continue. Dylan refuses and threatens to kill him if he ever comes near Norma again. Realizing he’s not getting anywhere, Nick has his men kidnap Norman while Norma is on a date, and take him out to the wilderness to put him in hot box-in order to blackmail her and Dylan.

Nick calls Norma the next day and tells her that if Dylan doesn’t kill Zane by a certain time, he will kill Norman. Nick later sends his henchmen to check on Norman. However one of them, Ben, catches Norman while he’s trying to escape, and finds Blaire’s necklace as well as a newspaper clipping of her disappearance, have fallen out of Norman’s pocket. He takes them to Nick, and the man realizes Norman killed his daughter. Dylan meets with Nick in his mansion with the unfortunate news that he cannot kill Zane without Nick’s help due to Zane being heavily armed and protected by his men. Seeing that Dylan has outlived his usefulness, Nick takes his gun out and tells Dylan to get outside for him to kill him.  However Dylan manages to fight him off before they can go, but Nick seems to get the upper hand. Dylan then takes a fire poker and hits him in the leg with it, also slicing him across the face, accidentally killing the man. He comes across Romero once he leaves the mansion, and the sheriff interrogates Ben for info on Norman’s whereabouts. They end up finding him and rescue him. 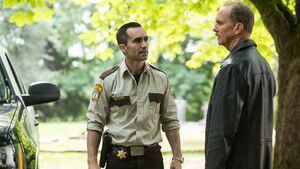 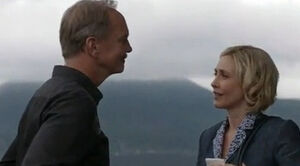 Nick with Norma Bates.
Add a photo to this gallery
Retrieved from "https://villains.fandom.com/wiki/Nick_Ford?oldid=3543525"
Community content is available under CC-BY-SA unless otherwise noted.